Fun and sun on the descent to Leamington

I've always said that September is a good month for cruising - much more reliable weather wise than the earlier summer months. The weathermen were over pessimistic to start with this week.  Here we are at Ventnor on Saturday night when it was supposed to be raining.

And so now we are enjoying a lovely sunny week tootling down to Leamington and back.  It's been so long since we last came down here that I'd forgotten what most of it looked like, and it's a pleasant surprise.  Mind you, with all those big locks it needs to be. Sunday got us from Ventnor down the ten locks to Long Itchington with a quick stop for a swift half (OK, pint) of shandy to cool us down at the Blue Lias

where the garden is somewhat better than the pub IMHO.  Then off down the last two locks to Itchington where we were amply and tastily fed  at the Two Boats.  Here I note that the beer pump clips are headed "Charlie Wells" - I wonder if he's turning in his grave at such familiarity.
Our Peter who is travelling with us was a bit distracted on day one, feeling a bit guilty having left his cat Bella at home to be fed daily by friends.  Then the little videos started coming in showing she was perfectly happy and he cheered up considerably.  Bless.

Monday was fun, still sunny and travelling along side by side with a merry crew on Andrew one of Calcutt's boats they hire out to ex Navy people.  At the Bascote staircase locks we performed the famous double shuffle with boats top and bottom changing places mid lock.  The crew coming uphill were a bit reluctant at first until I persuaded them that I'd done it dozens of times (actually it's only twice and  many many years ago). Everybody was slightly amazed that it worked. Here we are safely tucked up in the bottom half having completed the sliding puzzle trick. 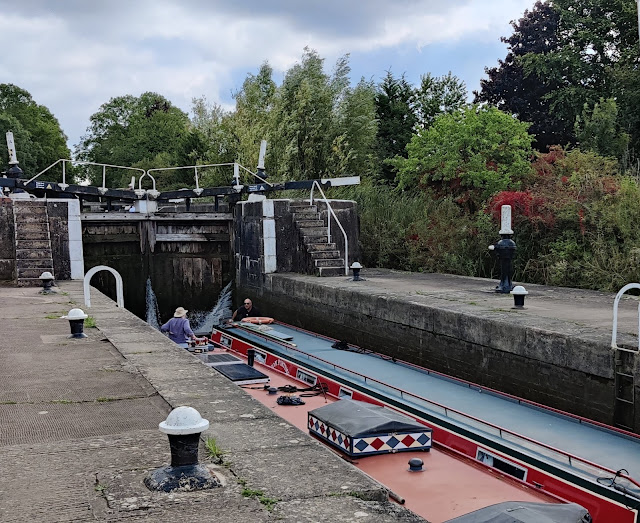 Lunch was a rather longer affair than we had planned because just as we were finishing our sandwiches on the towpath, a passing boat yelled "Oi Herbie", and who should it be but that old rascal Maffi and the lovely Susan.  So that took care of the next hour.  I can't tell you how many times we've been ambushed by old Maffi (actually he's younger than me) but it's a few.  There's no escape. So now we're up to date with all the canal gossip of course.
Then on to a quiet mooring where we had a barbie in our trusty cobb after which we filled it with sticks 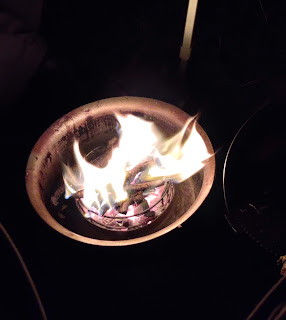 and sat in the dark warming ourselves in the wood smoke so that our clothes this morning smelled like kippers -aah well, it was worth it.
Now having shopped at Morrisons by the canal in Leamington, we're heading back.  I was surprised how much mooring there is in Leamington.  How safe it is I don't know, but there's lots of it.  Right now we're tied up at Radford which is very pretty.
I don't think we would have considered coming down here this week had we not taken up our mooring at Ventnor, but it's been lovely - if somewhat hard work. All this canal needs is a couple more pubs in strategic spots and it'd be a winner.

I see you were enjoying my gardening efforts at the Blue Lias.