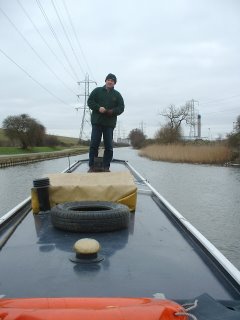 Forgive the alliteration! Sunday was cold and bright and the lock being fully open we headed south for the first time. This was to be a four day trip down the Lee navigation and right across London. Our good friend Pete Higson joined us as crew, particularly fitting as he did the same last year when we delivered our son Richard's boat to Huntingdon. Our picture shows Pete suitably clad against the cold wind which dogged us for the entire journey. Very few other boats were out and about, more joggers and walkers.

Just to cheer us up, almost the first thing we passed was the burnt out shell of a narrowbaot which had been the subject of an arson attack at Waltham lock, where we were to moor that night! We were fine in the event. This "top" end of the Lee is mostly rural and attractive, and we galnced up the pretty river Stort as we passed its junction with the Lee. Definately something for another day. Near there we were greeted by a lady aboard "Wizard". She knew Herbie well and was interested to meet us as her new owners.

Mooring at Waltham we walked in to see the Abbey and the supposed burial place of King Harold (of 1066 fame). Naturally we also visited a nearby pub the "Welsh Harp" and sampled a couple of gallases of McMullens "Sweet Chariot" - a special brew for the six nations rugby tournament and very nice too.