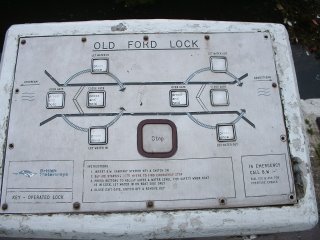 Day 2 of the trip. We headed south down the Lee, heading for Limehouse basin where the Lee meets the Thames. Not a pretty trip, it must be said, but fascinating and rewarding. Most of the day was spent with industrial plants on out right and reservoirs, gravel pits, or marsh land (including the famous Hackney marshes) on our left. As we neared London, the locks took on a new design and were electrically operated (see our picture). They were also in parallel pairs, presumably to speed up traffic. This didn't always work out because on one occasion the lock we chose out of the pair truned out to have no top gates, so we had to pull back and move to the other one.

Our first choice of pub for lunch the "Narrowboat" turned out to be (permanently) closed so we tootled on for the next one, the "Anchor and Hope" at Clapton. What a gem! This tiny one bar pub is on the waterfront (we had to climb over a fence to get at it) and is simple and plain but very friendly and has good beer. A painting of the previous landlord hangs above the fireplace - apparently he was awared an MBE for services to the community after a lifetime at the pub.

Having "rested" we pressed on towards Bow, where a set of locks control entrance to the tidal Bow Creek, we passed them by on our left , and with the giant Canary Wharf tower in our view, headed down Limehouse cut to the basin. 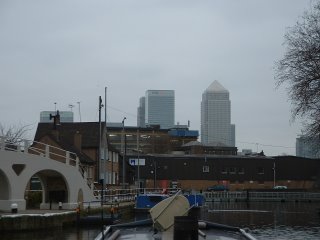 I had imagined Limehouse basin to be full of working barges and warehouse. How wrong could I be. It has had a major refurb and is now a trendy yacht basin with (presumably) expensive apartment blocks surrounding it. 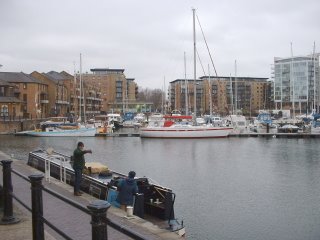 Anyway we moored there for the night, and afetr a brief look at the Thames beyond the tidal lock, the river seeming vast and much to wavy for us, we walked of in search of the "Grapes", a lovely old pub dating back to the 18th century and reputed to have been visited by Charles Dickens. Any way we ate Fish and Chips there and drank Timothy Taylor's Landlord and allwas well with the world whe we went to bed. 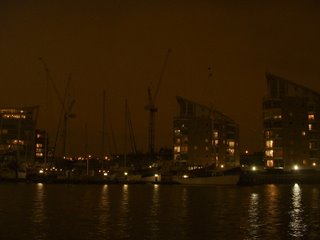 Our pictures this time show the electric lock controls on the lower Lee, the entrance to Limehouse cut by Bow locks, and Limehouse Basin before and after dark.