Going all the way

Mist lies over the Lammas land below Godalming wharf as we return to Herbie bearing a two pint carton of Elsie Mo bitter from the rather wonderful Star Inn in town. A bat is circling the boat outside and as we approached the boat a fox scuttled across the moorings in front of us. Earlier this evening the horse pulling the trip boat Iona passed us as its handler deftly lifted the tow rope over Herbie’s chimney. 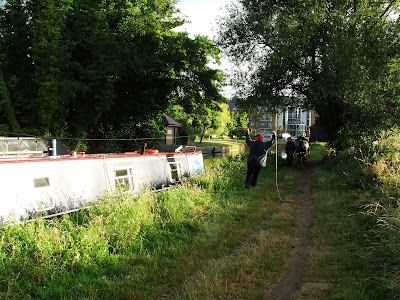 This is the end of the navigable Wey.

We got a good soaking as a sudden thunderstorm hit us as we approached Farncombe, the heavens opened and we had no place to pull in and shelter for several minutes. Up until then we’ve had a lovely day. The Wey navigation is all you would expect of a place run by the National Trust (which it is). It is green, well maintained and full of rustic charm. Often, I felt we were in a constable painting as we approached an old wharf amongst the hay fields. I kept waiting for the grotty bits, but there weren’t any. In the estate agents window in Godalming some nice little cottages were a snip at £1.25 million.

Even Guildford was nice, especially the bits after the town centre. Tomorrow we will return there to join the annual boat gathering, I hope we can get under the bridge at Shalford. Today we had barely an inch of clearance over Herbie’s chimney and it has been raining since, so the river may be higher.

I retract yesterday’s comments about the easiness of the lock gear. After Guildford they get very stiff and we were glad of the extra long handles to get some leverage.
Posted by Neil Corbett at 10:13 pm

Hello again Neil. Glad you're finding the Wey living up to your expectations. That downpour was something else wasn't it? Almost tropical without the palm trees! The Star is indeed the best pub in town - and the next time you visit the Godalming area - Scratchers at The Three Lions in Meadrow, Farncombe (a brisk stroll from Catteshall Lock) is renowned for their free live music Saturday and Sunday nights - blues with great atmosphere. Enjoy the boat gathering. Phil K www.weyriver.co.uk/theriver