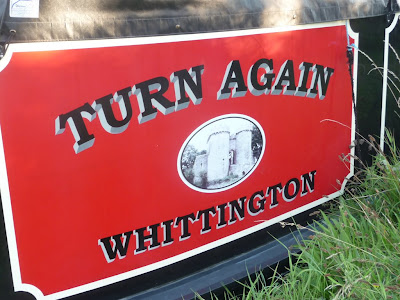 This picture is just to cheer me up. I spotted this boat at Saul junction, which is close to a village called Whittington.
Why do I need cheering up? Well, you may have noticed that we haven't done a huge amount of cruising on Herbie this summer. It's not that we don't want to, but we have been awaiting a call to action. For some months now our daughter Claire has been on standby to go into hospital for a hysterectomy ( perhaps it's to remove some of her hysteria). So we have been on standby to be baby sitters while she is in hospital and to act as convalescent home for the six weeks after.
It's not that we mind doing this, but the NHS has given poor Claire so many delays and cancelled dates that we have for months been hanging around unnecessarily. We could have fitted in a long cruise quite easily while the hospital has been keeping us on tenterhooks. Anyway, after a number of false dawns, today is the day she has her op, so at least we now have some sort of end date in mind when we can take to the water again.
Our frustration is compounded lately by the exuberant cruising log blogs from Lucky Duck, Halfie and Indigo Dreaming. They've been having a great time, all in places I would love to be, and whilst it's nice to read about it I get green with envy.
Poor old Herbie is getting lonely too, so to keep her happy we've arranged for her to go cruising without us! Over the bank holiday Rick and Marilyn will be taking newly weds Tim and Daizee for a trip, probably to Limehouse and back, and then the following weekend old friends Phil and Janet will have Herbie for a day or two to entertain youngster relatives. I think I should get them all to do guest blog write ups , don't you?
Our cruising will be limited to an hour down to the winding hole and back to get the boat pointing in the right direction for them.
Posted by Neil Corbett at 10:14 am

We'll take you cruising with us in spirit!

The NHS is frustrating on many different levels (!) - I hope that Claire's op goes well.

How good-spirited of you to allow your friends to enjoy what you cannot. And all because you are such lovely grandparents. I hope they all shower you wth affection (and maybe the odd bottle of wine maybe?!)
All the best for Claire
Carrie

Neil, I'm sorry to exacerbate your frustration, but yes, we really are having a great time! I'll try to remember to put in a photo tomorrow just for you. Meanwhile, I'm glad that Claire finally has the date for her op, and I wish her all the best. And if you're not out on Herbie (at last) in a couple of weeks, perhaps you'd like to assist Simon assisting us up the Hanwell flight. (Not that we need help, but it's always good fun working a lock flight, especially if you're feeling a bit deprived...!)

Oh I do sympathise Neil. Over this side of the channel we've also been having endless frustrations and now it looks as if we won't be going anywhere. Too long a story for here, but just to say I share your feelings. still, great to know your daughter has her date fixed and maybe you can have a nice autumn cruise when it's all over!