Wow! Bore is definately not a bore

This morning I saw my first Severn Bore. Only a two star (out of a possible five) apparently, but absolutely brilliant.


I stood waiting a long time at Maisemore bridge, all on my own and wondering if I had missed it. Your mind plays tricks when you are looking down river. Is that patch of light moving? No. 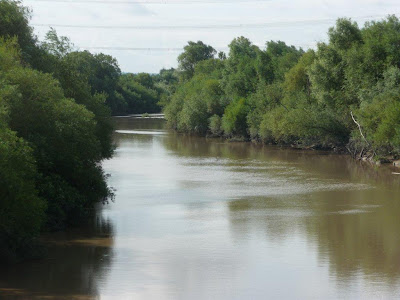 Looking down below the bridge the wet mud banks showed that the tide was low, so the bore couldn't have come yet. Still nothing and twenty minutes after the advertised time. Hmmm.
Suddenly I looked up river and any doubts I had were dispelled. With amazing speed the flood of water rounded the distant bend and I could see surfers on the leading wave. Yeee Haa. 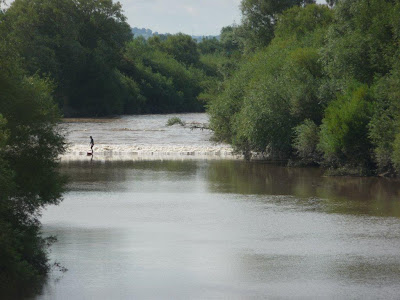 One thing that looks amazing as the wave approaches is the refection from the surface of the swell as it moves under the trees like a sliding curved mirror.
Soon the surfers were almost below the bridge and the roar of the wave clearly audible, just like a breaker on a beach. 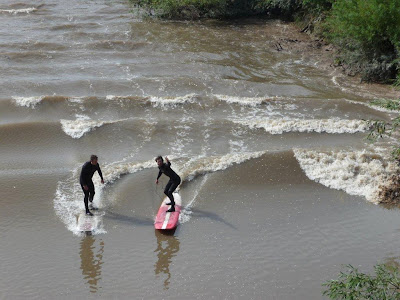 I dashed over the road to watch the wave push on upstream above the bridge. 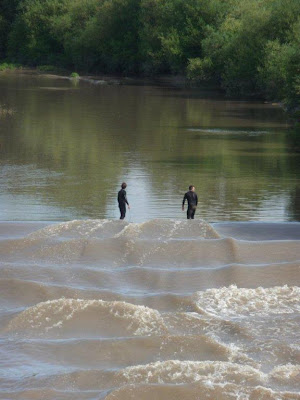 It was then that I was struck (not literally!) by the tremendous rushing volume of water behind the wave. Somewhat reminiscent of those awful scenes of the tsunami carrying loads of flotsam, there were logs, planks and all sorts of debris rushing up river.
My position was not far short of the weir which puts a stop to the bore, and soon in the distance I could see the rebound wave as the water smashed into the weir and bounced back downstream. The surfers were now swimming clear as the rest of the tide continued to pile in.
All this took less long to happen than for me to type this description, but it was worth the wait. There are a few more bores this week including some bigger ones so I'll be back to see them although the biggest will be in the dark.
Posted by Neil Corbett at 12:27 pm

Awesome - we've always wanted to watch the bore but didn't think it was worth the long trip down for less than a 5* bore. However, even the 2* looks impressive!

So, will you be tempted to do a little bore surfing in Herbie one day :-)

Wow, that's fantastic! I'm amazed to see people surfing too. Surely it's dangerous when the rebound wave meets the still coming surge that follows it? I would LOVE to watch this too. Amazing!