Yes I am still alive.  I just haven’t had much to write about lately and I wouldn’t want to waste your time dear reader with idle chit chat.

Last weekend we had one of the very rare home visit fro our son Richard who lives aboard his narrowboat Bankside near Huntingdon.  Surprisingly we talked very little about toilets and batteries, but the subject of keeping warm on a boat did come up.  Richard uses a squirrel for this purpose.  Now for anyone who thing Richard snuggles up with an arborial rodent, let me explain the a squirrel is a popular make of solid fuel stove.

A couple of posts back I mentioned that a stove would be one of my “must haves”  when choosing a boat.  Talking with Richard reminded me of things I should have added.

Stove position. – if you have a 70ft boat and the stove is by the front door, it won’t keep you very warm in a rear bedroom unless the stove has a back boiler to drive radiators.  The best place for a stove is as near amidships as you can get it.  On Herbie we are lucky, in that our stove is bang in the middle, both fore and aft wise and side to side wise.  Actually we’re in a good position to judge the relative efficacy of stoves versus central heating because on Herbie we have both.  Does the central heating get the boat as warm as a stove?  No way!  Not by a country mile.   The CH gives a gentle background heat, but the stove if well stoked up, can get you to open the windows on a frosty night!

Every now and then some unwitting soul puts a post on Canal World Forums on the Interweb asking for opinions on the efficacy of Ecofans.  For the non cognoscenti, an Ecofan is a clever fan that sits of top of the stove and by fiendish electronicery converts heat into electricity to drive itself round, thus moving the hot air from the stove to further afield.   For about a week after the question gets asked the forum buzzes with alternate  praise and scorn for this rather expensive but fascinating device.  People who have them generally believe they make a difference.  People who don’t have them generally have doubts.

Well we’ve got one and Richard has one too.  What do we think? In a practical sense they certainly do work, in as far as when the stove top gets hot the fan whizzes round very fast and does generate a gentle current of air.  Does it help warm up the boat?  Hmmm, Richard does and we feel as though it does, although that might be the placebo effect.  But hey, if a placebo works, it works!  Here’s an old snap of Kath with her feet up in her favourite spot by the fire.  You can make out the fan whizzing round atop the stove. 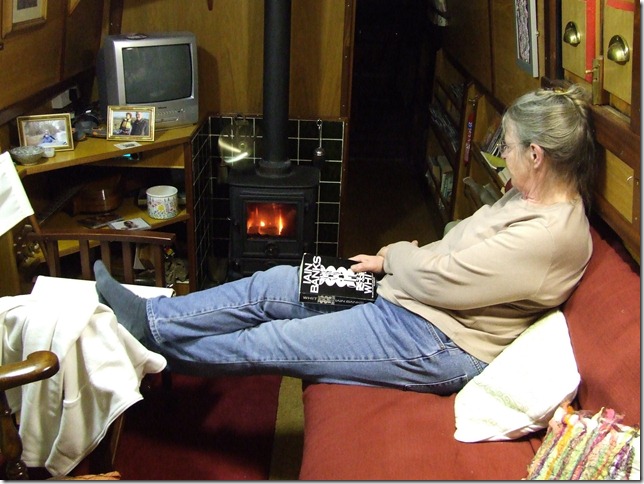 I’ve lost the Ecofan instructions now, but as far as I recall,I think you’re supposed to position the fan in front ofthe chimney flue so that it daws air around the hot flue and pushes it out front.  Sadly our little stove is a bit too small for us to be able to do this.  Late in the evening we generally try to position it so that it wafts the warm air towards the bedroom.

Ecofans are great fun anyway, and do give an indication of the state of warmth of the stove – the hotter the faster.  Richard uses his as an indicator of when to put on more coal.  I use ours as an indicator of where the fire is capable of rekindling when we get up in the morning.  If the fan is still slowly turning, I can generally re kindle from the embers.  If the fan has stopped I usually have to relay the fire.

There  are ways to keep warm on deck on cold days, including eating porridge for breakfast, keeping the hot drinks going and being dressed properly.  As the old saying goes, “There’s no such thing as bad weather, only the wrong clothes”.

It's the opposite, Neil. The instructions specifically say *not* to put the fan in front of the stove pipe or at the front of the stove. You need it at the back or side, so it draws air up from behind or beside the stove. The booklet is here: ww.ecofan.co.uk/ecofan-manual-wood-stove.pdf

I think it does work. Without the fan, the ceiling gets hot and the floor gets cold. With it, everything's much more even.

You forgot to mention the 'bionic' options - in addition to my heated handwarmers on the tiller (plugged into the boat batter), I now have battery operated heated insoles - the battery packs strap round my ankles (seriously)! They are brilliant!

So pleased to see you're blogging again. I was getting withdrawal symtoms.

Buy an eco fan and say goodbye to cold toes in the winter.

It ought to be possible to measure it scientifically, even with basic equipment.

1: Choose a time/day when the Met office is confident the outside temperature won't change much during the test period.

2: Bring the stove up to working temperature & wait until the interior is warm. DON'T use the Ecofan.

3: Measure the temperature at several points in the room, at both ceiling and floor level, and at front and back.

4: Install the Ecofan, wait a while for it to get a chance to work.

6. It would be handy to keep a measure of the air temperature outside as well, to ensure it stayed the same and didn't influence results.