High drama on the open seas.  Read about how our gallant crew was forced to abandon ship and spend the night in the seaman's mission.Well, when I say open seas I mean Crick marina, and when I say seaman's mission I mean Rick and Marilyn's house, but life and death drama nevertheless.

On Sunday we arrived to board Herbie for a few days R&R.  We lit the stove and began to settle in.  It was a cold night and despite our best efforts the stove wasn't getting all that hot.  Then when Kath was returning from getting a fresh bucket of coal (she has her uses), she noticed a big lump of metal on the floor at the back of the stove.  On closer inspection it turned out to be the circular blanking plate that seals the alternative chimney flue orifice.  That explained why the stove wouldn't draw properly, there was a five inch hole in the back of it!

Further inspection revealed a broken clamp that seals the plate from inside the stove.  Here you see the plate and the cracked clamp. No fixing that in a hurry.  What should we do?  Soon I realised that this was dangerous.  That big hole might well allow a lot of carbon monoxide to flow into the cabin, especially if we damped the fire down for the night.  Extinguishing a stove, once lit, is not all that simple, and anyway it was freezing cold.  ( I should perhaps point out that we do have a carbon monoxide detector but I don't know how much I wanted to trust it in this case.  Incidentally Kath calls it a monosodium glutamate detector but she was never all that good at chemistry.)

The only other choices were a) risk headlines like "retired couple found dead aboard narrowboat - carbon monoxide poisoning suspected", or b) abandon ship.  Had we been out somewhere in the sticks this would have been a big problem.  We would have had to carefully empty the hot coals from the stove and spend the night with the Eberspacher roaring away like a jet engine or freeze to death.  Remember the boat had been uninhabited for several weeks and needed a lot of warming through.  Luckily Crick is only a ten minute drive from Rick and Marilyn's house so we resorted to appealing to their better nature and they offered us a bed.  Thanks R&M.

A quick scan of the internet showed that a new clamp could be obtained, but not in less than 14 days.  However if any one can fix something like this, it's Rick.  Next morning, in about fifteen minutes, he made a substitute clamp out of an old bit of steel strip using naught but a hacksaw, a hammer and a vice.  Here it is 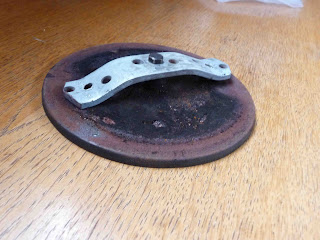 Eagerly I retired to the boat to fit the new clamp, and it did fit!  Were my troubles over?  No.

To fit the clamp I had to remove the fire bricks and the flue baffle plate inside the stove.  Easy.  Then I had to refit them.  Aah, not easy.  When I removed the bricks the baffle plate fell out on its own before I could see how it fitted, and it seemed no matter what I tried, I couldn't get it back in.  In the ensuing struggle, now joined by Rick, I managed to crack two of the three fire bricks.  Later investigation showed that the best price for these bricks was £35 (ebay).  Rats!  Now I had caused more expenditure than I had saved.

Slowly our luck began to turn.  Scanning the internet I eventually found a diagram showing how to fit the baffle.  After three hours of failure, we found the answer and fitted the baffle plate in thirty seconds.

By now we were both very black and sooty, so once again retired to chez R&M for the night.  Then, Kath somehow recalled that we saved the old firebricks from our previous stove, which was the same model.  After some rummaging in the log box I found them intact this morning and to cut a long story short we are now up and running and warm and cosy.  Total cost -£0.  If I had to do the job again now, I could do it in a couple of minutes instead of several hours.

Which brings me to Herbie's Law of DiY.

DiY saves you money and is not too difficult,  the second time you do a job.  The struggle the first time is the price you pay.

Well, I was thinking that 'disaster corner' was looking a bit dated!

Thanks heavens you found the fault before you were gassed - and glad that you've raised the dangers of CO - I think people don't realise how serious it is.

I'm delighted that you've survived to blog another day and that Herbie is habitable again.

Funny that, because I had the same thing happen to my Morso stove this year too. However, I did not notice it for 24hrs and slept on board as well - narrow escape? Well the carbon monoxide alarm did not go off. I wondered why the fire would not draw at the time. The following day, there was a lot of smoke in the cabin and that's when I investigated. My blanking plate has two clamps - one each side and one of the bolts had been snapped for a long time, by the look of it.