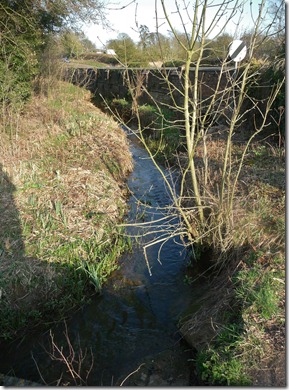 There are an alarming number of river Avons, mostly because Avon is an old word for river. Here we see The Avon at Welford, which confusingly is nothing to do with Welford on Avon which is near Stratford.  Same river though. This picture is taken at Welford Northants where the Avon is just a couple of feet wide and six inches deep  ( I think that might classify it as un navigable) and is very close to its source. It runs within a few yards of the canal basin, and   I bet like me, a lot of people mistake it for the reservoir feeder to the canal.  However, it never touches the canal although it continues parallel to the summit of the Leicester line for some miles before peeling off towards Warwick.

So now you know which Welford is which.  Or do you?  Disconcertingly, there are as many Welfords as Avons and to add to the confusion, one of them is close to the Kennet and Avon canal !  That of course refers to a different Avon, the one that goes out through Bristol, and not the one that rises on Salisbury plain and goes down to Christchurch.  Are you still with me or have you lost the plot by now?

Anyway, I was very happy to find this little stream at Welford because it reminded me of the many happy hours (well years actually) I wasted on the banks of the Avon near Evesham in my youth.  That’s why I called it The River Avon.   I should have dropped a little paper boat onto it at Welford with a message for my brother who still  lives close to the Avon at Offenham

I wonder, as everywhere is so dry, where the water comes from, because the little stream had a reasonable flow on it.  Springs I suppose, although I can never work out why springs emerge on high ground.

Anyway next time you are boating through Stratford upon Avon, or down through Pershore to Tewkesbury you’ll know where it all starts.  Make sure you’re on the right Avon though.