You don’t have to follow this blog for long to realise I’m a sucker for facts and figures.  So imagine my excitement today in getting a copy of Bradshaw’s Canals and Rivers of England and Wales. 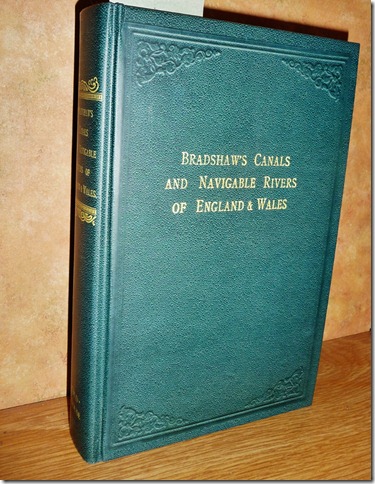 Originally compiled by Henry Rodolph de Salis it was first published in 1904, and now you can get a facsimile of that edition from Old House Books.  With a name like his, you might guess that our Henry was not a working boatman, but he was an engineer and a director of Fellows Morton & Clayton so we’ll let him off.

Rather like the better known Bradshaw’s railway guide, this details every bit of canal and navigable river operating at the time with descriptions, mileages, navigating dimensions and all sorts of other stuff.  I’m in facts and figures heaven.

I’m loving it already. One of the first things I picked up on was a piece about the costs of providing locks with water.  Bradshaw quotes a study in 1896 which showed that it cost £1 4s 8d to provide the approx 56,000 gallons of water to fill the lock at Tring summit (presumably Marsworth top lock) from the artesian well presumably where the pumping station now is up the Wendover Arm.  That’s a lot of money – in today’s terms anything between £100 and £1100 depending how you measure it.   I wonder that the canals could operate economically at that rate.  My first thought was that even at the cheapest price, that wouldn’t take more than a day on the canal to spend your annual licence fee!  But of course you don’t use a fresh lockful every time you pass through a lock, you carry it with you until you get to the bottom of the hill.  Even so I would hope that it works out a lot cheaper today.

Just down the canal from another well at Cowroast however, they could do it for 13s 7d, practically half the price.  Strange, cos that’s on the same level.

Up in Brum, the BCN only cost 2s 4d for a lock full, although admittedly the locks were only half the size.  Maybe they didn’t rely so much on pumps.

What a find! It sounds fascinating!