Designing a boat bathroom - a call for advice

Our existing bathroom on Herbie looks something like this 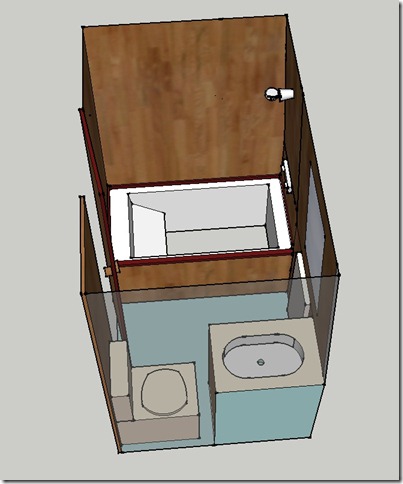 You see the door from the corridor just ajar on the left.  The side facing us is actually a solid wall, made transparent here so you can see inside.  As you can see we have a sort of hip bath thingy which doubles as a shower when we pull a curtain across.

Our idea is to move to something like this with a stand up shower and some shelves. 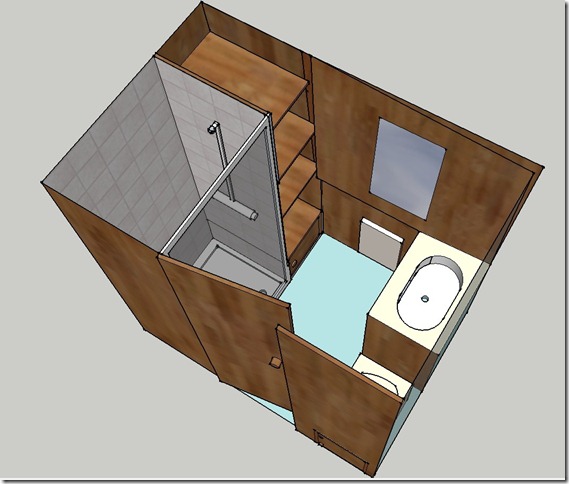 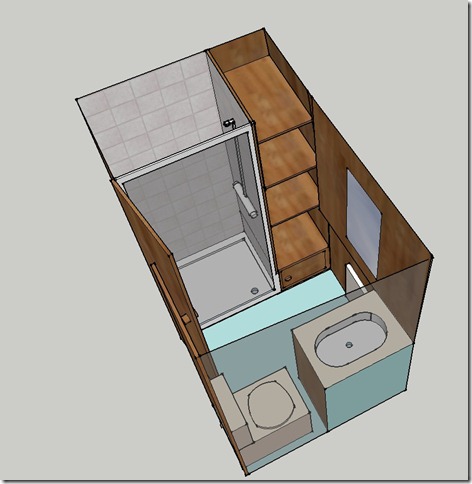 I have long kept a plan drawing of Herbie’s internals with measured dimensions, and using that and Google’s amazing free Sketchup software it doesn’t take all that long to produce these 3d images which you can rotate at will.

We’ve already had a man come and measure up for a quote for a revamp along these lines.

Apart from having a proper shower and some shelves we’ll benefit from having a new thermostatic mixer instead of having to juggle with separate H&C taps as we do now.  Kath a is a bit concerned about the size of the shower tray, which because of the position of the bathroom door has to be max 610mm or about 2ft in old money front to back.  The width across the door is a bit better at 750mm or about 2ft 6ins.

Our fitter has specified a bifold door, which I’m guessing he would have folding into the shower.  Wouldn’t that be a bit of a squeeze when you are opening and closing it? – or do they sometimes fold outside?  I’m thinking a full size door might do just as well with the hinge at the left hand side. It wouldn’t open fully, but enough to get in.

Has any boater out there got a shower this size, and if so, how do you get on with it?  Any comments would be gratefully received.

I can not speak about designing for boats but if I had a bathroom that size on land I would forget the usual shower tray and put a wet room tray for this area. The hole is about 20 degree below the floor level. This means there is no annoying edges for the door to catch on.

A suggestion _ there appears to be wall jutting out beyond the toilet before the door starts. Why not move the door over towards the toilet by 6" (if poss) and so give the shower an extra 6" of depth?
I cant see why you cant have shower door which opens outwards hinged on the corridor side.
Andy

We had a shower with rectangular shower tray installed on Shadow last winter maintenance. You know what? I can't remember whether it's a bi-fold door or a simple hinged-at-the-edge one! But it is a vast improvement on the space-wasting corner bath it replaced. And I would go with the shower tray and not have a wet room (sorry Lorna!) And I don't know the dimensions, so I'm not really being a lot of help, Neil!

This is our dry land bathroom put in when the house was a new build ( not our choice ) The space is 710mm x 740mm I find this just OK but my other half feels its claustrophobic ! The towel shelves look a bit of a luxury.

It's maybe not the most elegant solution but it works well and we do have an exceedingly good shower!

As you know, we have a single door, opening out into the room. It isn't hinged at the side though -- it pivots about 6 inches along. I'm pretty sure our shower is square, and I think it would be smaller than the dimensions you're talking about. If you can afford to lose some of the storage space (and I guess it's all extra to what you have now), I'd use some of the space to make a bigger rectangular shower.

Shower doors which open into the bathroom drip water all over the floor.

The difficulty with shower doors in boat bathrooms is that standard ones designed for houses are too tall. We fitted a bifold door which came from Midland Chandlers and is shorter - maybe that the one proposed? It fold into the shower. The width is fine, but you have to remember to duck down as you enter the show because the door isn't very tall and the frame is at forehead height.

That looks like our bathroom but in reverse The door opens inwards onto the basin with the loo next to it on the other side we have the shower cubicle which is about 800mmx800mm with a bi-fold door (inward folding)the shelving is all below the gunwale and is less than 6 inches wide. The luxury of having a hot shower and all the elbowroom you need is priceless after a british summer day. Our door is only 500mm which give's more room i suppose.

As an Occupational Therapist on dry land (once assessed a boat) who has a boat I'm sorry to say those bi fold doors cause us a nightmare. They leave very little room in the shower.
Have just downloaded sketch up though, thank you :)

I would go for a bigger shower and smaller shelves, your comfort is more importantant than that of your towels after all.. If you can avoid a door that opens outwards do so, the dripping water into your shower room is a nuisance. Have a look at www.wesleywindows.co.uk/ as they do boat dimension shower doors. We used them Yarwood's shower doors.
Happy hunting!
Lesley

Have you considered a quadrant shower? We've one on our share boat and the sliding doors mean no drips on the floor and no worry about cramped space inside the shower when opening the door(s). Not sure of the size on our boat, but they are available with a 600mm base.

I am with John on a Quadrant shower. If you would like to see one in situ give me a shout and we can meet at the boat (Addlestone). Do the shelves need to be where they are? Would they offer a bit more space if they were on the opposite side of the show I wonder?

Quadrant showers are ideal in through bathrooms, but are very difficult to make fit in off-corridor ones like Herbie's.

I don't know if you noticed, but our outward-opening shower door doesn't drip on the floor, because there's a clever little channel that flips up when you open the door, to catch all the drips and direct them back into the shower tray.

If you decide on a bigger shower tray and the ideal size isn't readily available, I know a boat builder who makes his own fibreglass shower trays. Let me know if you want the details.

I work in the showroom buisness, no I'm not trying to sell you anything just help out. My husband and myself are regular boaters aswell . I've often said to him that the doors with the pivots are a great idea for boats, there are no swinging doors and you don't loose any room in your shower. The smallest that I would recommend for a reasonable shower would be 800mm, any smaller is small unless you're both tiny. We recently hired a boat that had a similar arrangement but had shelves no more than 6/8 inches wide, they were plenty big enough for well folded towels, bottles, shampoo etc and other bits and pieces, don't forget they go back quite a long way! Good luck with whatever you decide.