Volunteering stuff, the appeal of lock keeping and what it's like driving a CRT workboat

On Friday I went along to a volunteer recruitment meeting at Brentford. Interesting. About a dozen people came along. After a talk on what CRT does in general, we heard from a current volunteer lock keeper and I said a bit about being a towpath ranger. Quite a few recruits were keen on lock keeping, but we only got one new volunteer for the towpath. A result of my lack of persuasiveness? No, it's just that people have this idyllic view of the lock keeper's job. Only a few of them knew anything about boating or canals in general. They'll learn I suppose. One thing I did learn was that some of the lock keepers also help with workboat painting in Southall.

Then on Saturday I had the final stage in my qualifying as a CRT Helmsman and Deckhand. That was fun. There were three of us doing the test and I'm glad to say we all had boating and canal experience. Remember we had all already done the RYA helmsman cert, a Health and Safety course and a Fire and Water Rescue course. This final stage was a CATS (Competence Assessment & Traing Scheme) assessment.

We had to take a work boat, Pride of London, from Uxbridge to Adelaide dock in Southall, passing through Cowley Lock en route. That was easy enough. Pride of London has tiller steering and a normal morse control for the engine and gearbox. 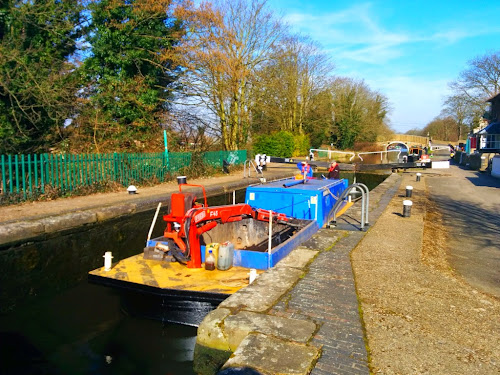 She steers pretty much like a normal narrowboat, albeit she is a very different shape and the digger thingy on the front gets in the way of forward visibility a bit.

Our assessor, Mick, was an old BW/CRT hand and was easy to work with. He showed us where things were on the boat and we had to do all the usual switching on of things and engine and stern gear checks. We took it in turns at the tiller over the first mile then he watched us negotiate the lock then we put him ashore and we continued the next couple of hours on our own, frantically swotting up on the Guidance Notes on which we were to be tested when we arrived at Adelaide. These notes amount to 51 pages of stuff about Canal Bye Laws, workboat design and standards, safety and stability stuff, helmsman and deckhand duties and responsibilities, maintenance and breakdown considerations, anchors, gangplanks etc etc.

It happened to be my turn at the helm when we arrived at Adelaide Dock and I managed to get the boat in through the narrow entrance without incident and parked up alongside another boat. Then Mick emerged from the office and shouted that he wanted the boat across the other side of the dock, necessitating me reversing out and then bringing her sideways across the dock against a side wind. It wasn't elegant but I managed it! 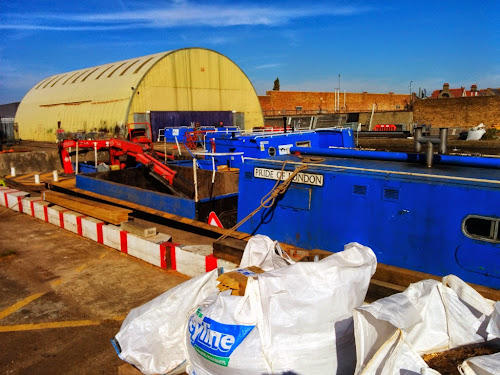 Then after a cuppa, we set about the tests. Mick asked us a list of questions based on the Guidance Notes content. Much of the usual stuff about horn blast signals, safe stowage of petrol, actions in the event of an accident, use of anchors, lifejackets etc etc. and some daft questions like "should an intoxicated person helm a boat?" I was surprised by how much I knew!

Anyway, we all passed and we are now signed off ready to take out a boat when required. Or to be fair, certain classes of boat. Apparently we are the first three volunteers to be CATS assessed in the London region and possibly in the country.

As you would expect, operating a CRT boat requires daily form filling, engine check tick boxes, and safety checks, hours recording and so on, but in fact it's mostly stuff you might do on your own boat anyway. The crew accommodation is reasonably comfortable below deck, having seating for about four crew, a microwave and electric kettle, sink, toilet and so on. Eberspacher heaters are these days being replaced by diesel stoves which are more reliable. Then of course there is a compartment with tools and all sorts of work paraphernalia.

All this training and testing has taken a long time but I do now feel reasonably confident of knowing what to do if and when I get asked to move a CRT boat.

As I sit here writing this, I am aboard another boat. Yes, we're finally back aboard Herbie after an unusually long winter break. Not sure if we'll take her out as we only have a couple of days before we need to get home for medical appointments, but it's good to have Herbie back in operational condition and warmed through.

Posted with Blogsy
Posted by Neil Corbett at 12:23 pm

On Friday I went along to a volunteer recruitment meeting at Brentford.

ooh, next time let us know in advance & we can debrief you in the pub afterwards, as it were... (if it fits with plans, obviously)

That sounds fantastic, I wouldn't mind doing that. Trouble is I would never be there to do it!

I wonder if they would take a volunteer on the move? ;)