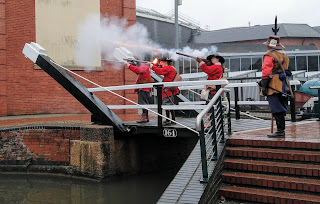 Could this be a new way of CRT dealing with overstayers in Banbury? Well there were a lot of spare mooring places so I guess it might have worked. If Donald Trump ever takes over CRT he might well adopt it as policy. These guys might have been re-enacting some civil war event, but it certainly never happened on the Oxford canal which didn't open until 140 years after the civil war.

Speaking of Mr Trump, I spent a pleasant half hour yesterday working out anagrams of his name. The best I have come up with so far are, LARD DON'T JUMP, DUMP DARN LOT, DROP TAN M"LUD, and MAD NURD PLOT.  A disappointingly near miss was DROP MAD NUT L. Maybe you can come up with some better ones.

I do like Banbury, all those little streets interlinked by alleyways. Yesterday we found something to recommend (vegetarians look away now), in the little alley opposite the Reine Deer pub, the kind of butcher's shop you are always looking out for. Proper locally sourced meat and not at all expensive. You know it's a good'un when the queue of customers stretches out of the door and along the street.  Add that to the market stall where the man sells lovely lardy cake and that's enough reason to stop over in Banbury right there. Mm, perhaps not for healthy eaters though.

We moved off today in search of a TV signal to watch the grand prix. Telly reception down here is pretty bad. In the end we had to go all the way down to the Pig Place near Nell bridge where we knew there was a spot with a good signal. I hope after all that effort, the race will be worth it. As you'd expect with the stoppages and it being out of season,  the canal is very quiet. Lovely.
Posted by Herbie Neil at 5:26 pm

Also your paint job looks fantastic (I was drawn to the DIY posts). I assume you and/or some of your painting elves have much previous experience?

I'm pretty philosophical about bumps and thumps to our paintwork, but may not so much if I'd spent as much time and care on it as you!

Can I ask where the 'posh' wet dock is?

Hi Paul , thanks for your comment. We had NO previous experience of boat painting!

The wet dock is outside Packet Boat Marina on the GU south of Uxbridge and is run by High Line Yachting, not the marina. Their charges are very reasonable for such a good dock. I would definitely use it again.