Reynard’s rest – a Fox near the Fox 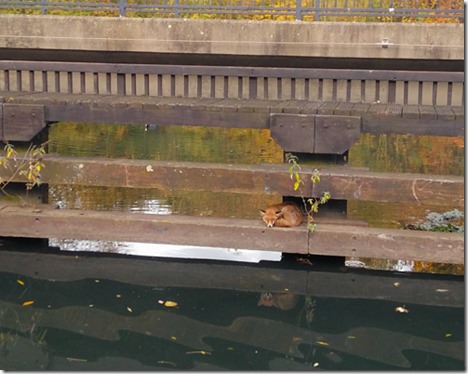 I like foxes, and this one was a little sweetie, taking little notice of us yesterday as we piloted Jena past.  Connoisseurs of the canal might look at the nasty grey colour of the water and conclude that we were down near Brentford, and they would be right. This is the weir above Osterley lock.  All very appropriate as it’s not far from the Fox pub.

It took us ages to get down Hanwell locks because they were busy with boats in both directions.  Luckily we had some lovely volunteers to help us.  We had some interesting boats to gawp at while we were there.  This one grabbed my attention. 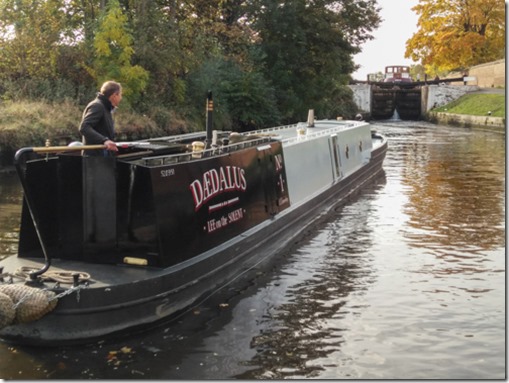 A 67 foot tug built by its owners using facilities at HMS Daedelus, hence its name.  I’ve often driven past there (we have good friends living nearby) and seen a narrowboat being built, but apparently it wasn’t this particular one that you could see from the road.  Anyhow, look along the gunnels to see its interesting shape.  I guess that step up is to raise the tug deck, which would make sense.  Here, he about to run aground, as we did, because the inexperienced crew in the boat above, you can just see it in the lock, had drained the pound by trying to fill a lock with one of the bottom paddles half open.  One mistake you don’t mind, but then they did it again in the very next lock. Doh!  Oh well, their boat, a whopping gert Piper widebeam barge thingy (very smart and no doubt palatial within, but not to my taste) was a mere seven days old, and had just come off the Thames that afternoon, so they weren’t used to canal locks.

Jena now rests at Brentford ready for a steady trip back up to Ricky next week when CRT staff on board will be looking at mooring sites.

Nice to see Daedalus again - we escorted them on a trip along the Thames tideway back in 2013 :-)