Picture Quiz Answers plus a teaser on the big award.

Well, or course dear old Adam got ‘em all right as usual.  Well done Adam, you’re a star. I will resist the temptation to carry on until I catch you out.  Here are the answers.

The first picture of the boat chimneys was a heavily cropped section of this photo: 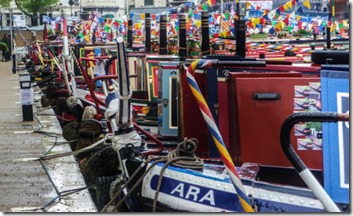 taken at the Little Venice Canal Cavalcade one year. Here’s another view: 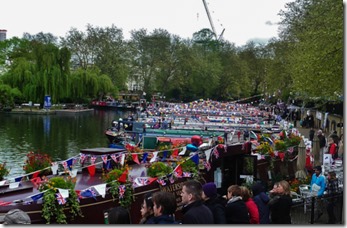 and of course it’s on the famous Brownings Pool which some say (and others dispute) is named after the poet Robert Browning.

Question 2 was pretty tough, but it shows Yelvertoft marina from the viewpoint of the beacon on nearby Crack’s Hill

Question 3 showed a snowy scene at Cowroast lock in 2009, perhaps more recognisable from this: 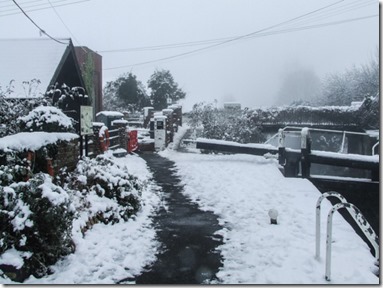 and the nearby Cowroast Inn is well known for serving Thai food, which is the answer I was looking for.

and finally question 4 showed the parapet of the wonderful Grapes pub at Limehouse, looking down towards Canary Wharf.

Here’s the pub seen from the river. 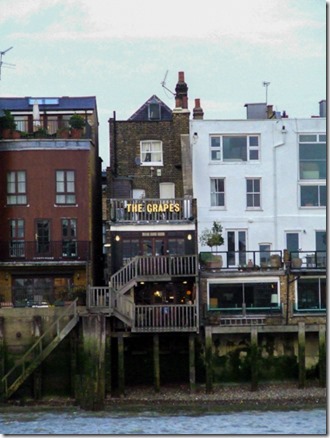 and as many folk know, the Grapes is owned by Sir Ian McKellen, who, as it happens I saw only this week performing in Harold Pinter’s No man’s Land.  The hardest question of all might have been “what the hell was that play about?”.  Search me, but it was entertaining and Sir Ian was eminently watchable alongside Sir Patrick Stewart.

And so, we’re on the run up towards Christmas and the main award, the Annual Herbie Award, to someone who has inspired us for what they have done this year. In fact this year, we have a mind to award it twice, to two entirely separate individuals who have something in common.  You might like to guess, but I don’t think you could.  Stay tuned.

I’m off now to attempt to make a Herbie video Christmas card for you all.  Wish me luck.