A morning surprise and a night time shock..

Arriving at our favourite mooring at Great Linford, it looked just as attractive as ever. 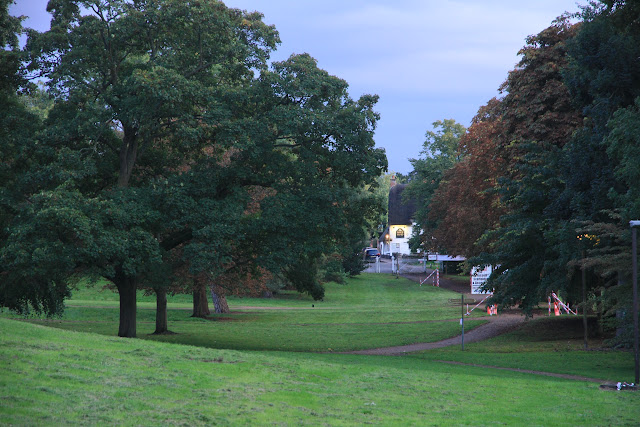 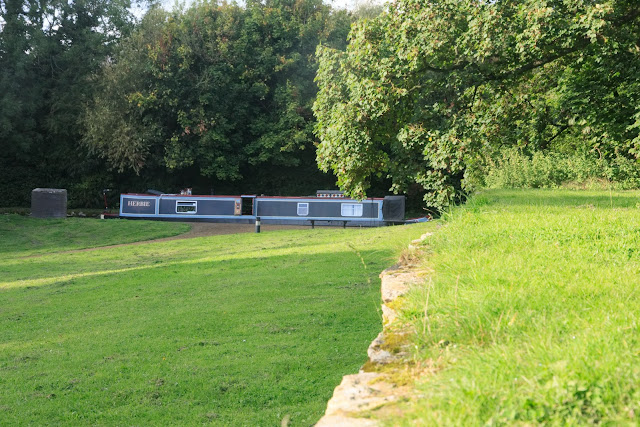 It's a spot I never get tired of. Very peaceful with just the occasional dog walker.

Next morning however we pulled back the curtains to see half the park covered in marquees, gazeebos and vans! I strolled down to take a look. I was a bit taken aback that it had all arrived that very morning. It was the Milton Keynes Food Festival. Artisan bakers, brewers, distillers, pie makers, ham smokers, cheese sellers, currys, samosas, paellas, and a lot more I can't recall now. Also there was a tent with live music and another with gourmet chefs giving coookery demonstrations. Well what a treat. The only annoying thing was that we had eaten breakfast before pulling back our curtains. Anyhow we got some fab cheese and some great sourdough bread, some Indian pasties and a couple of yummy takeaway curries for the fridge. They're all gone now. - that's both the food fair and the food we bought.

Later that night, about half past ten we were sitting quietly on the boat listening to one of my ace (even though I say it myself) playlists, when there was a terrifically loud bang outside the boat. An explosion in fact.

Looking out into the darkness we could see flames about a hundred yards away. Something was burning fiercely, first in three plumes of flame, then two, and finally one which must have lasted for at least ten minutes. We couldn't see or hear anyone out there. I decided not to go nearer to investigate, in case whatever it was exploded again. Eventually it all went quiet and we went to bed.

Next morning I walked down to investigate and this is what I found. 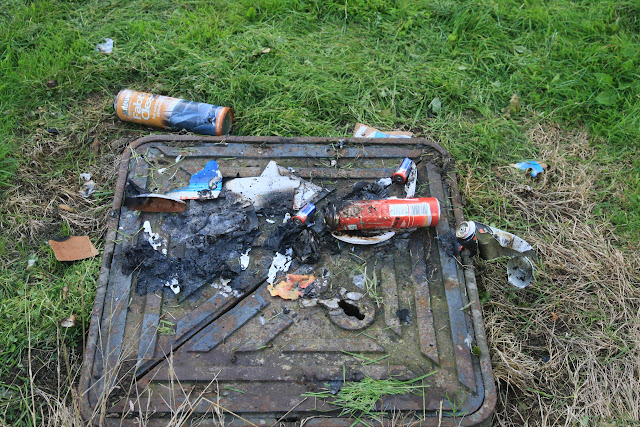 Three aerosol cans, one of which had clearly exploded and two which had burnt out, a couple of torch batteries and a lot of burnt cardboard, all on top of a drain cover. I rang the police and reported it in case it was someone practising bomb making, but there being no wires or anything like that, I daresay it was kids who set fire to the cardboard, then threw on the cans and batteries and retreated to a safe distance. It was, I assure you, one hell of a bang.

Next day our 48 hours at the mooring was up and we were due to move, but the mooring warden came by and said we could stay another night as it was not busy. Thanks Mr Warden. These moorings belong to The Parks Trust, as do the ones at Campbell Park, where I'm told the warden is not so generous. The overstay fine is 50 quid.

Cruising through Milton Keynes is a genuine delight, over two hours of really attractive park land, all I suppose run by the Parks Trust. Well done them.

Tonight we rest our weary feet in Fenny Stratford, having walked over the hill and down to IKEA and back as well as the obligatory traipse through the store. It was worth it, because we now have a load of reasonably priced LED lightbulbs for home, and a few other things we never knew we needed. IKEA is like that.
Posted by Herbie Neil at 8:44 pm