Jobs for the Boys

CRT have got stuff to keep them busy up here, but people are grumbling about how long it is taking. The lock second from the top of the Napton flight is causing big queues. One bottom gate paddle is out of action entirely and the other can only be raised a couple of inches so the lock is taking twenty minutes to empty. I've heard tales of people queueing for three hours!

Back down at Whilton the other day there was a fallen tree right across the canal. This hastily grabbed as we passed photo doesnt show it too well, but the tree has fallen from the right hand bank as we look at it. 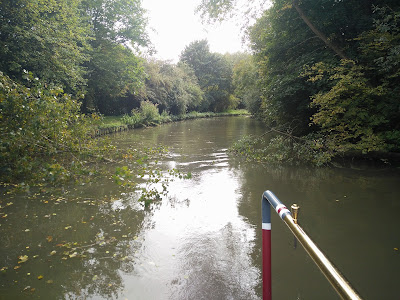 Mercifully the trunk has sagged enough to let most boats float over it, but only just. Out of gear of course.

Then today I heard a tale of what might be CRT performing an unrequested duty. Cutting a boat's securing chain. At least we presume it was them. Up near the Wormleighton radio mast on the Oxford summit a man had left his boat for a few days while he had gone off to work. He had secured his boat via a chain between a ring on the edge of his roof down to the arnco, locking it with a padlock. When he returned to his boat, he found that his chain had been neatly cut with bolt cutters and placed on the roof complete with his padlocks. We can only assume that someone from CRT concluded that chaining a boat in this way is unsafe because the boat could tip over sideways if the water level changed materially. However I would have thought that up here in this ten mile pound, such a rise or fall would be highly unlikely. Is this general CRT policy I wonder? In which case it would have been nice of them to leave a note explaining their actions.

Speaking of Jobs for the Boys, I have resumed writing my sequel to my blockbuster novel of the same name, as I have now spent the twenty quid it has earned me and need more funds. I am currently up to 46,869 words, every one a gem, well some of it makes me laugh when I read it back at any rate. I am aiming for a minimum 80,000 words, so only 33,131 to go.

Should anyone be thinking of attending the Banbury Canal day this weekend, that's where we'll be. Knock three times and quote the password "cake" and we might invite you in for some. And a cuppa of course. The weather forecast says wind and rain, but we can always hope they are wrong. Where is Michael Fish when you need him?
Posted by Herbie Neil at 5:43 pm

It sounds as if there's more for CRT to do than they can cope with! Well done with resuming the book! Let me know when the sequel is out! Okay, I realise it might be a while and not quite ready for Christmas, but I would definitely like to read it!

Great blog Post and it made me crack a smile. Thanks for that. Good pictures too. Funny how far away Napton seems from up here on the Maccie.