And so back another day to a week ago Wednesday when I drove out to Cropredy to collect anchor, chains and life jackets from Herbie in case disaster should befall us on Nb Bankside on the Friday.  Not that I’m a pessimist or anything!  Anyhow, upon arrival I noticed that the canvas cover over Herbie’s roof box had come loose along one side and was flapping in the breeze.  It hooks on via bungees over big black dome head screws stuck into the side of the box.  On closer inspection I saw that the screws had pulled right out so there must have been some strong winds.  On even closer inspection and poking with a screwdriver I discovered that the plywood had gone completely rotten, so no wonder the screws had fallen out.

“You can’t get the wood these days” is a common cry amongst DiYers, and I remember thinking at the time I built the box that the quality of the plywood I was able to obtain was pretty rubbish.  I had sealed the edges with umpteen coats of varnish but time and weather eventually has done it’s work and now I have to make a new box.  Still the last one, being built in 2011 has given nearly seven years service so I suppose that’s not too bad.  Here it is when I had just finished making it. 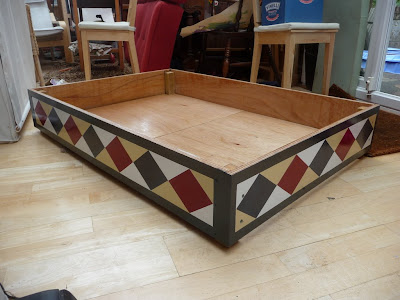 “Why have one at all?” I hear you cry.  Well apart from the fact that it stores the anchor, the TV aerial (and has brackets to support the aerial mast), the camping chairs, a luggage trolley and various other bits and pieces, nicely out of the way, it has also become a sort of emblem of the boat.  I recall Bones telling me that she recognised Herbie going past Thrupp when she was out walking the dog and could only see the roof.

So I’m going to have to make another, but this time I’d like to make it stronger and more weatherproof.  I could either splash out on some nice marine ply, or it occurs to me that I could make it out of treated decking and then for the decoration attach pre painted panels on the sides (an idea I used last year on the cratch front).  I think I’ll keep the dimensions the same, so that the old cover will still fit.  I haven’t yet had a chance to get a good luck at the old box, but I may be able to reuse the underfloor slats and even the floor itself - recycle and save the planet and all that. I remember at the time I made the old one being particularly pleased with myself at setting the corner right angles by marking four equal spaces along the long side and three on the short side, then pulling the loosely screwed box into shape until a string 5 measures long formed the diagonal  (maths people know that 3,4,5, triangles have a right angle thanks to Pythagoras).  Watch this space when I embark on the construction.

Apologies to those of a sensitive disposition offended by my spelling of Gunwharf Quay (not key – duh!) in the last post.  Kath spotted the error.

In other news I read with dismay that the Gibson guitar company is on the verge of bankruptcy.  Yes Gibson!! What is the world coming to? Despite being a life long sufferer from GAS (Guitar Acquisition Syndrome)  I have never owned a Gibson, but it was always nice to know that they were there.  As a callow youth I well recall standing at the feet- he was on the stage and I was leaning on it- of Peter Green , awestruck by what he could do with a Gibson Les Paul.  I did the same thing a couple of weeks later with Eric Clapton who played the same model.  That was in the days when you didn’t have to pay a weeks wages to see a famous musician and you could get up close.  Now the music charts are full of nice young guys and gals singing ballady stuff and the days of the guitar gods are fading.  This week a journalist wrote that what Gibson needs is a new guitar hero.  Well I stand ready for the call.  Hello Gibson?  Hello?  I’m here.  I’m younger than Mick Jagger.  Hello?

Oh dear! Bad news on both fronts, Neil! Your beautiful box and the Gibson company. As for the former, I’m sure you’ll make a replacement just as beautiful. For Gibson...well...I find it hard to believe it’s really over. Surely someone will save them?

Have you thought of using UPVC window sill extrusion for the up-stands ? They would not rot & if you get the correct type of paint they can be decorated. It's about 5/8" thick with a 1 1/4" edge lip & is quite strong.

Have you heard of Buffalo Board Neil? Virtually indestructable plywood with a non-slip phenolic resin coating on both sides.Frequently used for the flooring in horse boxes and you can't get much more misuse than that!