I've heard it said that BOAT stands for Bring Out Another Thousand.  Also that things come along in threes.  Well how about a failing engine mount, a wrecked tonneau cover and a collapsing stove for example 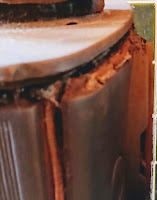 just as we're about to set off for our trip to Kings Bromley marina in the cold  weather.  The last two I discovered this week when I've been out at Herbie stocking her up with food and clothes for our forthcoming trip starting next Monday. We've known about the mount for a little while and we're booked in at Calcutt for a replacement en route, so that's sorted.  The tonneau cover has been slowly wearing away for a while too - it is 19 years old, and the weight of rainwater collecting on it in all the storms we've had delivered the final coup de grace - well that can wait, it's not an essential item.  The stove is a more serious matter and it seems to have happened while the boat has been laid up over winter.  The back seems to be falling away leaving a nice big gap for carbon monoxide to kill us in our sleep.  Whilst I could plug it with fireproof  high temperature sealant, just imagine the scene if the back finally gave way when it was full of hot coals or ablaze with logs.

Time for another raid on the old Herbie sinking fund methinks.

Fortunately, our route takes us past Midland Chandlers in Braunston and a quick phone call and a subsequent visit yesterday has sorted out a replacement stove which we can have fitted  on site by their recommended friendly fitter.  There even ordering in two sizes for us so we can choose which best fits onsite.  So we just have to keep warm for a few days till we get there.  Our Eberspacher isn't as good as the stove for keeping cosy, but the radiators it drives will keep the chill off.  I have decided against another cast iron stove - the last two have both developed lid cracks and given way at the back, albeit after a decent life, so this time we're trying a much cheaper steel one.  The lady in Midland Chandlers said cast iron is more suitable for people who keep the fire in all winter, so avoiding lots of starting from cold and consequent thermal shock. She may well be right.  Coincidentally our son Richard had to replace his Morso Squirrel not long ago  - it had failed in a similar manner to our stove- and he now has a steel one, also from Midland Chandlers, which he seems satisfied with.

As if all this wasn't enough, when the tonneau collapsed it dumped several gallons of water onto the back deck.  The deck has a drain, but not enough to cope with all that water at once, so I've had to clear a lot of water from the engine bay. Our bilge pump doesn't really get at anything less than about half an inch deep.  I had to sponge it all out yesterday, which in that confined space is not a trivial task.  In the end I devised a cunning plan and manipulated the sponge using a litter picker, saving me a lot of contortion.

Hey ho - we soldier on.  Actually the weather is not so bad as it has been and the first signs of spring show us we might have a relatively pleasant trip.

We have also considered the threat of coronavirus, but my reckoning is that being out in the sticks on a boat away from people could be no bad thing, and anyway we'll probably get the trip done before it spreads that much.  Que sera sera.
Posted by Herbie Neil at 12:40 pm

Our stove did that a few winters ago -- well, the front came away, but similar.

Re the last half inch of water in the engine bay, get a pack of cheap nappies and throw a couple down there. In ten minutes, they'll have soaked up all the water and you just have to fish them out.

Hi Adam
Yes I've got some nappies in there now finishing off the last dregs, also in the oily sump under the engine. The only problem is responsible disposal of the nappies.

Hi Neil and Kath,
We had a fabulous tonneau cover and a wonderful cratch cover made and fitted by John Wiper (07837 489632‬ and john.wiper@hotmail.co.uk

Very reasonably priced and excellent quality. He is based in Brum and will come to you for measuring then fitting. He's a top man!

Thanks Marilyn, when the dust settles from our move, we may well seek him out.
Neil

Hi, I'm certain you are doing the right thing with your stove as our second Morso also rusted over the winter due to lack of use. We too went for a steel stove, Bubble in our case. Jo ex n/bSarah Kate