Locks -you either love 'em or hate 'em.  some are a right pain whilst others are so good you can't wait to do them again. By my reckoning we've only done 70 odd locks this year. What a load of slackers we are!  Actually because all our journeys are out and back the number of different locks we have passed through is only 34.

It was with mixed feelings this year when after some years down the Oxford we once again found ourselves amongst the big Grand Union Locks.  We had to keep reminding ourselves what hard work some of the Oxford locks were, Bourton Lock springs to mind with it's ridiculously stiff paddles, or even worse come to think of it, the top paddles at Somerton deep lock where I bent a windlass.  Also too many locks on the S Oxford are in a poor state.  So, the better maintained GU locks didn't seem so bad after all.

So which were our favourites this year? I can think of three flights I enjoyed..

Hillmorton flight, which is of course still on the Oxford, supposedly the busiest locks on the system but generally a pleasure because of they are in parallel pairs and the setting is pleasant.  They have slightly unusual paddle gear too, which is always a nice change.

Stockton flight - big locks coming at you thick and fast but strangely enjoyable as you can send someone ahead to get the next one ready and there's a good chance you can find a friendly boat, as we did, to share with.  Being less than half the number of locks in the Hatton flight , it's not too daunting. Added to that, the setting is attractive and which ever way you go, there is a pub at the end. Three at the bottom actually! 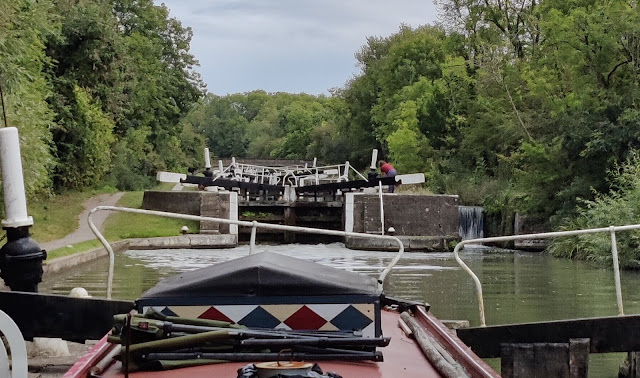 Unlike the identically constructed lock at Calcutt, you don't get blown all over the place or lee shored against a concrete wall while waiting either.

Lastly the Staircase locks at Bascote - a bit daunting to the beginner but great fun if you can organise a shuffle as bioats cross over in the middle.  We hit it with novice crews top and bottom and it took some persuading from yours truly to get them to attempt the boats in both locks thing.  "Are you sure this is allowed? It says don't go in the bottom if boats are in the top." "Yes. fine, I've done it hundreds of times" I lied.  Well I have done it four or five times.

But it all worked fine and the novices were all dead chuffed. I think it was their surprise and delight that made it such fun. Kath particularly enjoyed chatting to the ex navy guy on the boat next to us, swapping stories.  Kath was in the Navy (the Wrens) in her youth, when ships presumably had sails and cannons.

So which is this year's favourite?  It surprises me that I enjoyed Stockton so much. After not going down there for some years I wasn't looking forward to it but now I like it.  But the cigar I think has to go to the locks which were such good fun so

The Herbie Award for Favourite Locks in 2021

It wouldn''t be the Herbie Awards without a pub so next time we'll look at them.

I like the Bascote staircase too. However every time we go through them I try to work out how you would work them if the side ponds were still working. I think last time I might have worked it out but I've now forgotten!

Mick, yes something to ponder (excuse the pun) in the long dark winter nights.