A disappointment, some fireworks, and a recovery.

Curses. I got a phone call to say I still had a small gas leak on the boat when they retested following my fitting of a new regulator and hose. The test pressure was falling over a 5 minute test. So I turned to good old Google for help. Of course it showed I could buy a gas leak tester for 30 quid, but I didn't fancy spending that. Would I be able to fix it anyway if I found it? Then I found out that a fine spray of soapy water on the joints should show up leaks as bubbles. So that was the plan for Sunday.

Saturday night was fireworks, and we went to a free (charity collection) display in Bracknell at the dry ski slope. A good opportunity to try out my new(ish) camera in difficult lighting conditions. I like this shot - it shows skiers holding flares approaching the audience. 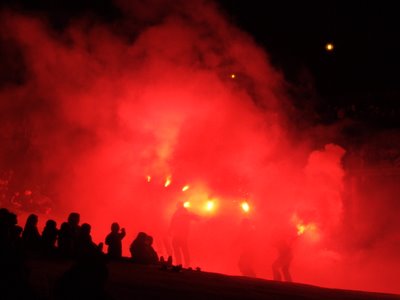 I also tried out the camera's video facility and I was amazed by how good it was, including the sound. Sadly, Blogger doesn't support videos, and it takes a lot of bandwidth anyway, so I can't show them to you.

On Sunday it was back out to Herbie to attempt to find and fix the gas leak. The soap solution worked a treat and I immediately found the leak where the pipe union screws into the new regulator. A couple more tweaks of the spanners and it stopped. Now I feel a bit daft that I didn't check it in this way when I put the new regulator on. Oh well, we live and learn.

I also had a go over the boats charging system with the my multimeter. The voltmeters on the dash show different readings for the starter battery charging and the domestic batteries. When the engine is running, they should be the same as they are connected via a relay. I suspected a faulty relay, but the meter showed it to be OK. Anyway I now know the cause. The voltmeters on the dash are giving false readings! One is reading over one volt lower than it ought. So what looks like a faulty charging system isn't.
Posted by Neil Corbett at 5:13 pm