A reminder of a sticky adventure 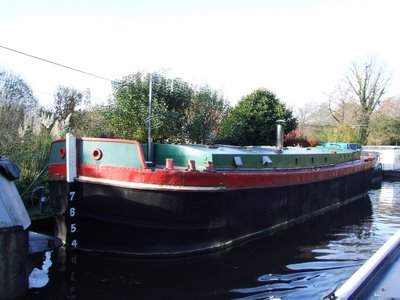 This is a picture of Olive, a converted Humber Keel that resides at Cowley on the Grand Union. We pass her every time we go North from our base. A good number of years ago I had the chance of a trip on her, and an interesting trip it was!

Olive is the floating home of a friend (Dave 1) of a friend (Dave 2), and she was due to have her bottom scraped, inspected and blacked. Being such a big boat, it was decided that the best way to get her out of the water was to take down onto the Thames to Isleworth, where she could be floated onto supports which would be exposed at low tide. So that was the plan.

I was recruited, with Dave2 to help through the Locks on the way to the Thames, and invited to do a turn on the tiller on the way. Everything about Olive is huge. To operate the tiller, which was about 8ft long, you couldn't just stand still and move it with your arm, you had to walk side to side across the deck! Getting under bridges was a matter of ducking down low. Dave1 was a bit concerned about the low bridge on the tidal stretch at Brenford, and we knew we had to wait until the tide was right to get through.

All went well until we arrived at our first lock (Norwood top lock on the GU, where we went through on Herbie a few days ago). getting in to the lock was fine, although Olive was about 14ft1 in wide and the lock was only a smidge wider. The water was duly drawn off and Olive descended gracefully to the lower level. Gates open and off we go, - except that we didn't! The lock sides obviously narrowed at some point and Olive was stuck. We tried full power to push her through. No deal.

Dave 1 was getting anxious at this point. His home was jammed in a lock.

We decided to refill the lock, back Olive out at the top, and think what to do next. The problem was that this did no good as Olive was still stuck. A quick phone call to BW was made and an operative appeared shortly. "I know Olive has been through this lock a few years back", he said,"but I think the lock sides have bowed in a bit since. We'll open all the paddles and try and flush her through." So the bottom gates were opened, all the sluices were opened, and a tremendous force of water surged through the lock. Still no joy. Olive was well and truly jammed.

"We'll have to pull her back out at the top" said Mr BW, "I'll go and get a work boat and pull her out. There's one moored just up the way." In only a few minutes he was back on a little blue tug thingy and a big rope. The rope was tied fast to Olive and with a tremendous splashing and churning, the little tug with its big engine strained at the rope. Tighter and tighter it went, until with a loud crack the rope gave way. Had the rope hit any of us at that point it might have killed us, such was the speed at which it flew.

By now we had gathered quite a few onlookers, it being a sunny weekend day. Various suggestions were made, such as taking an angle grinder to the lock wall, or applying a layer of grease to it. Dave 1 was not amused. This was his home we were talking about.

An hour passed, with various attempts at this and that, and a queue of boats was forming, waiting to use the lock. Things were looking desperate. Suddenly, someone said, "I can see her moving", and sure enough, for no explicable reason Olive seemed to have freed herself! Dave 1 was decisive. "Right, "he said, "we're going back home. We'll never get through all these locks. I'll have to have the bottom done somewhere else." Out of the lock we backed, Olive was turned and we set off back towards Cowley, which Dave1 not a happy bunny.

It was now getting very late and when we arrived back at Cowley it was pitch dark. Amazingly we managed to turn Olive and squeeze her into her moorings (which only have inches to spare at either end) by torchlight.

Well, that's the story. Olive's bottom today looks like it has had its clean up, probably in the dry dock at Uxbridge. Dave2 was pleased to see her when we passed her on Herbie last week. Whether she'll ever see the Thames again is anybody's guess.
Posted by Neil Corbett at 2:26 pm