Over the weekend we have been on Herbie doing jobs and also relaxing. Apart from a short trip down to the winding hole to turn the boat round, we've stayed still, but our moorings are a very pleasant spot so who neeeds to move all the time?

Geoff and Laura on our adjacent boat Lady Elgar set off on a three or four (my memory is useless) week cruise on Saturday, so for that time we have the priveledge of having Herbie against the bank instead of against Lady E. Quite a treat for us.
I did bits of painting and an oil change, and Kath started on a crochet window decoration which will eventuall spell ot HERBIE (so far she's up to R). We also came to a final-ish design for our revised sofa bed. Researching into foam upholstery reveals quite a range of possibilities such as cushions with two layers of different densities and even varying thickness from one side to the other. Armed with all this gen we now have a plan and have found a place in Bristol that can probably do the biz for us. The result will be a more comfortable seat that will be less effort to convert to a guest bed at night. - (and yes Rick, it will also keep your head off the wall).
On Saturday night we were invited to join a barbecue party by Ian and Lydia on the boat in front of us. Also attending were a number of other residential boaters from up and down the bank nearby. An interesting group, some of which live aboard but never move their boats so they have a different perspective from us. Nevertheless as always happens with boaters, the conversation eventually came round to toilets! Most surprising though was a long and erudite conversation on real ale with a French lady who is really enjoying her CAMRA membership. There's hope yet for entente cordiale, especially as she has the same favourite beers as we do.
On Sunday I replaced the gasket on the weedhatch cover - of which more in a future post. Meanwhile Kath struck up a conversation with a couple who had come to look at boats for sale, and as they were full of questions we invited them aboard. "Ah," they said "this is exactly the sort of boat we would like". Flattery will get you everywhere, but Herbie is not for sale!
A productive weekend all in all, and sociable too.
Meanwhile here's a picture of us a week ago, moored in centralish London at Kensal Green. Nice innit? 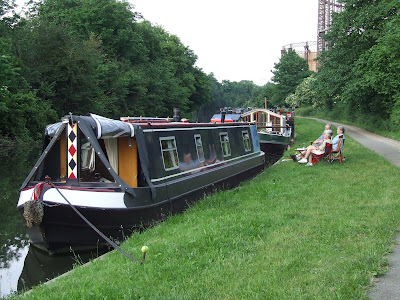