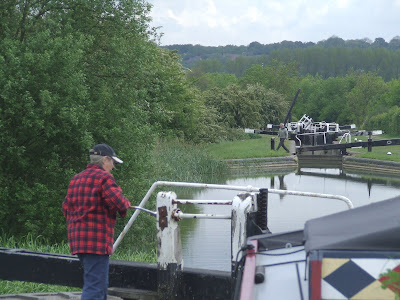 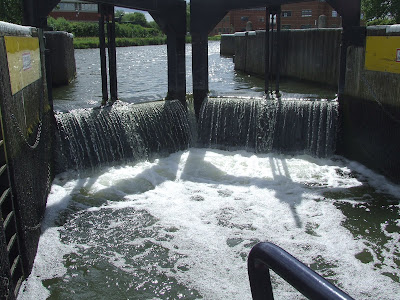 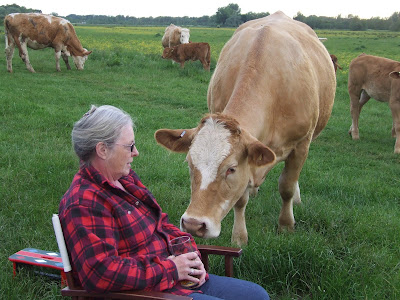 What a cracker! The Northampton flght and the first bit of the Nene are just as good as I remember them. We got up early and were on our way by 8am, reaching Gayton junction by 9 for a quick stop to empty loos and rubbish, then off down the 16 locks to Northampton.

These must be the quickest locks anywhere. The time from leaving one to leaving the next was sometimes only 5 minutes. The roar of the M1 comes and goes as we pass through its course and we see over the rooftops of the distant town as we descend the hill, which is green and pleasant like a country lane.
At the bottom we entered Northampton in the only heavy rain shower of the day, at last joined the river Nene and moored at the quay for supermarket shopping and lunch.
The sun came out as we set off again and we had a glorious afternoon cruising through the lush water meadows and negotiating the quirky guillotine locks which seem designed more for flood control than the passage of boats. It's a miracle that some of them ever empty because the water pours over the top gates as fast as we let it out at the other end.
In the space of one minute, as we approached Cogenhoe, we saw a bat, a fox stalking rabbits, a pheasant, and a family of geese and goslings. The fields swep steeply down to the river on our right, and on our left is the flood plain of water meadows full of buttercups.
Cogenhoe, our stop for the night was just like last time we were here, even down to the cows coming over to met us as we sat on the bank for our dinner.
Finally to end a perfect day we walked up the hill to explore the pretty stone built village (not cheap I would think) and discovered the pub had a quiz, which we entered and came last but one. As usual our downfall was film and pop music.
Posted by Neil Corbett at 7:15 am

Lovely post Neil. At least I can enjoy it through your writing, but would so love to do your trip too. About the quiz, that's the trade off for a life obsessed with boats...we have the same problem ;-)