Three days before the mast

Ahaaar me hearties! Our annual Norfolk Broads sailing weekend is over and I'm getting my land legs slowly back.
I'm pleased to report that I am no longer the holder of the bowsprit trophy (awarded to the person at the helm at the time of the most damaging incident) for I was merely on duty as movable human ballast at the time when a large motor cruiser struck us smartly amidships as we tacked into Ranworth cut. The trophy now rest on the mantelpiece of friend Bob. The collision was substantial and not a little alarming at the time. The ensuing damage to our boat was of deposit losing proportions unless the insurance company smiles on our hire boatyard. 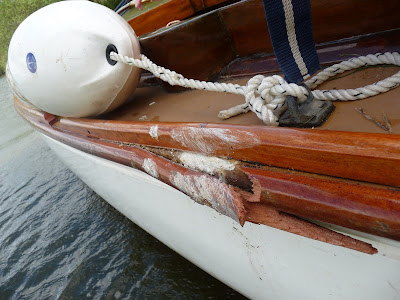 We had very mixed weather wind wise, ranging from flat calm to very stiff gusts, thus bearing out the old adage of sailing being long periods of boredom interspersed with short instances of blind panic! I have a sunburned scalp from the calm bits, and aching hands from hanging nervously on to ropes as we leaned over trying to keep the water from rushing in to the boat in the windy bits. Kath wisely gave sailing a miss on Saturday when the wind was strongest and so she missed the crash and the most scary bits of the weekend. The boat traffic on the Bure is like a London street. 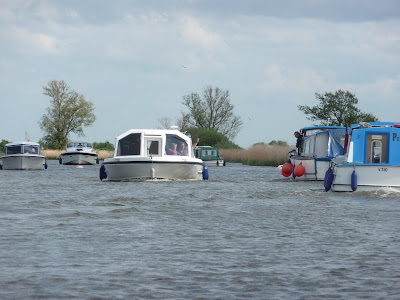 Most of the skippers on the hire cruisers haven't got a clue what to do as the sail boats tacking up river zig zag amongst them. Its a miracle we didn't get hit more often.
Anyway our large party all had a jolly time exploring Hickling Broad, Rivers Thurne and Bure, and Ranworth Broad. Those of you who know Hickling will be sad to hear that the well known Pleasure Boat Inn is closed and boarded up. However the rather fine Lion at Thurne was doing a roaring trade in food and beer all weekend so someone is making money in these hard times.
The boats we hire are called half deckers - open boats seating four people comfortably and having a fair amount of sail for their size. On Sunday we passed through a dinghy race and we were holding our own against a lot of them. Only the daredevil guys on Lasers and fancy boats with trapezes were seeing us off.
Here Kath tries to look calm as we whizz across Hickling Broad, 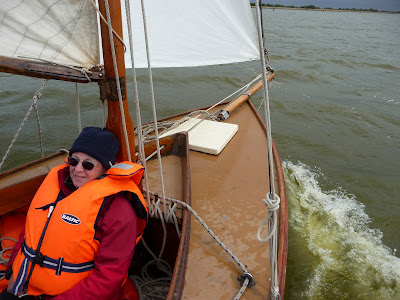 and Rick looks suitably masterful at the helm. 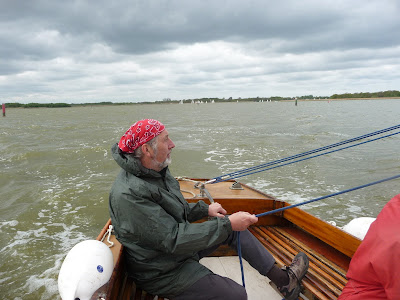 We have to row or paddle a bit here and there when the mast or sails are lowered, especially to get under the very low bridge at Potter Heigham. All part of the fun. 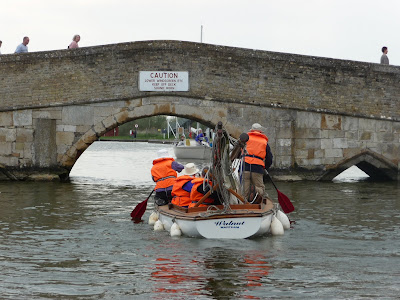 We're on land now for a fortnight before resuming Herbie's cruise, but Rick and Marilyn are taking her out for a spin, so perhaps I'll invite Rick to be guest editor for a day when he does it.
Posted by Neil Corbett at 11:05 am

Now I know why I've never fancied sailing! Give me the comforting thrum of a good motor below decks any day, as well as the peace of the canals with lots to look at! Still glad you all had a jolly time of it.