Technophobes might like to wait for my next post which will be far more about artistic things. Anoraks read on :-)
My new Smartgauge is wired up and working and already giving interesting results, although it is supposed to take a day of two to synchronise fully.
The first thing I noticed was that the voltage I have previously been measuring by putting a multimeter across two points behind the engine control panel was reading 0.1 volts low compared with the Smartgauge which I have wired directly to the battery terminals using some properly crimped connectors. Now you might think 0.1 volts is insignificant but if you read my previous post you will realise that that represents 10% of battery capacity which is very significant.
The next thing I noticed was that battery capacity fell by about 10% in ten hours overnight due to use of the fridge. Useful info, because I need to know how much capacity to leave in reserve overnight before charging on the next day's cruise. In fact, that means the discrepancy I previously had in voltage measurement amounted to the overnight usage.
So I reckon Smartgauge is already proving its worth. Tonight Claire and family are aboard Herbie in Paddington and they like to watch a lot of telly so I was able to show them the gauge and tell them at what point they might need to switch the telly off according to the gauge so as to leave enough for the fridge overnight. Easy.
Wiring it up was very simple really except for getting the cables through the engine bay bulkhead. I did think for a while that I had done something wrong because after a few minutes the Smartgauge seemed to conk out. I redid the connections a couple of times before I realised that it was simply that the display turns of after a couple of minutes to save power. You just have to touch a button to bring it back. Doh!
As for the final installation in the cabin, I have adopted a temporary solution while I decide where it should finally be located, so for now it rests neatly fitted into a washing powder box!

An example of what a voltmeter alone won't tell you. Here the gauge shows 14.2 volts during charging 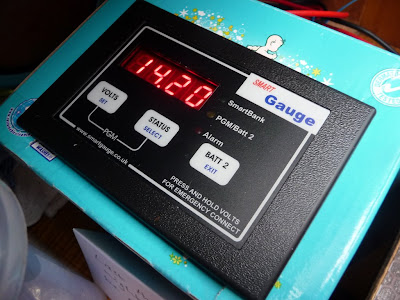 Here the gauge shows how far charged we actually are = 81% - I had no way of knowing that before. Voltmeter readings only work with the battery at rest for some time 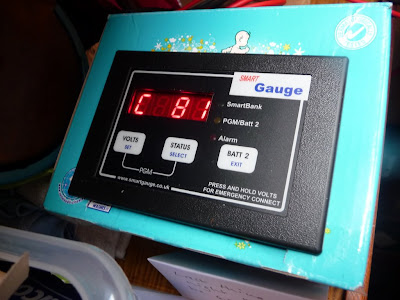 I've just told my Koos about this! I think he'll be keen to rush off and buy one himself, seeing as he also suffers a bit from battery paranoia!

Does the manufacturer say how it works?

The maker, well known to Canal World Forum readers as Gibbo, doesn't say exactly how it works but as far as I understand it, it uses some sort of computer model which understands how batteries react when charging and discharging and monitors very small changes in battery voltage on a continuous basis to feed into the model. You really have to read all the bumph on the smartgauge website. There is masses of it. It claims to get more accurate the longer it is in use as opposed to amp hours counters which do the reverse.