The poor old Met Office have had a bit of stick lately because they predicted a barbecue summer and here we are beset by showers all the time. Don't be too hard on them though because May and June were hot and sunny for the most part and our fens trip had very few wet days and lots and lots of hot sun. To prove how hot it was, look at this EA chap cutting weed on the Wissey. 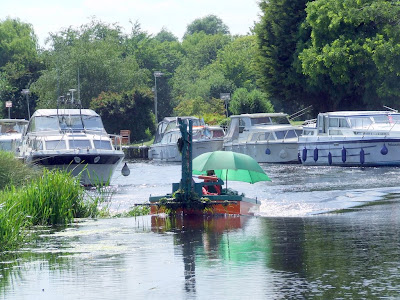 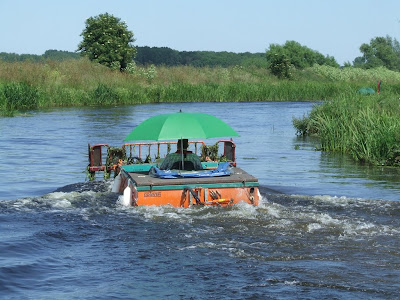 The umbrella wasn't to keep him dry, it was to beat off the sun. We were doing similar things on Herbie at the time. The weed was growing like crazy. More weed cutters were out on the Middle levels in March when we passed though. They had more permanent shelter. 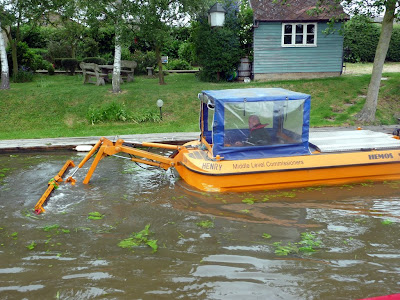 Thankfully the weed on the Slough arm was way past its worst by the time we reached home. Less sun = less weed :-).
By the way, if you should spot Herbie in London this weekend, that'll be Claire and family who have borrowed the boat. I nearly told them not to go because today was supposed to be heavy rain. So far here, 20 miles West of the capital, the rain has yet to arrive and Claire has texted to say they have reached Paddington (or Camden?) and moored up in the dry.
Posted by Neil Corbett at 6:00 pm

The summer is back here. Hope it will for you soon. I like the weed cutter boat!