Never get complacent. After last week's high spirits and good news about my tax rebate, I fell ill on Friday morning and have only returned to the land of the living this (Tuesday) morning. Fear not, I'll resist the temptation to give you too much information about the ailment, ask you to spare a thought for poor Kath mopping my fevered brow, and pass on to happier things.
Even as I lay on my sick bed my associates carried on worrying for me (although not necessarily about me) concerning all that needs to be done before we repaint Herbie in four and a half week's time. An email from Rick reminds me that we want to replace the turnbutton thingies that attach the cratch and rear tonneau covers to the roof.

I suppose years ago I might have spent a lot of time and petrol in looking for such things. Now thanks to Mr Berners-Lee OM, KBE, FRS, FREng, FRSA 's interweb, things are easy to obtain.
Other things which proved impossible to buy locally, and believe me I tried everywhere, were these Clean and Strip discs. They weren't even all that easy to find on the web 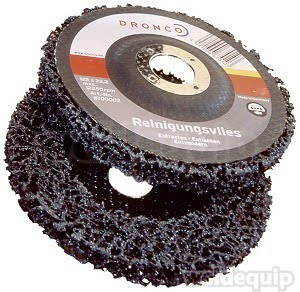 They fit on an angle grinder and are supposed to be brilliant at getting off old paint and rust without scoring the metal surface. I don't know if they last five minutes or five hours, but I've bought four. The main area where they will be used is inside the aft deck sides which , unlike the rest of the boat, has too many little chips and scrapes to make treating individual rust spots and blemishes feasible.Excuse the poor photo quality:- 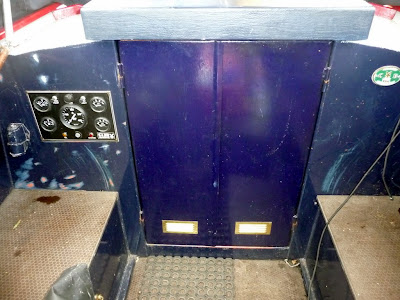 I hope these discs will be flexible enough to cope with the gently concave surfaces at the sides. Has anyone out there used them??
I hope to feel recovered enough to nip out to Herbie and give the discs a try later this week. Meanwhile I need to get a couple of coats of varnish on the cratch table - an easy job.
Posted by Neil Corbett at 1:41 pm

When I redid the Duck's roof, I just bought a box of 120 grit sanding disks, and a plastic backing piece. Each disk would clean about 3 square feet of roof back to bare metal, before needing replacement, but they worked very well. That said, I've seen similar brillo-pad like abrasive disks and apparently they're good but expensive!