How to cheat at signwriting 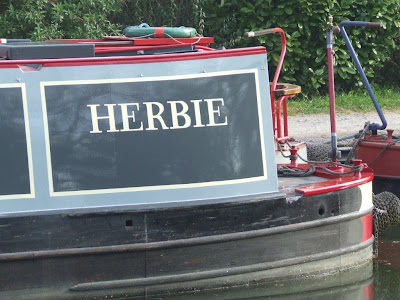 Let's get this straight. I am not a good signwriter. I managed to produce a passable name on Herbie, but it needs improving, even before I start to add the shading.
In the wet dock it wasn't easy because the boat was continually disturbed, not only by my good friends climbing all over it, but also because passing boats outside created a drag which pulled Herbie back and forth against her ropes.
So I opted for a masking tape solution. using my previously prepared (see earlier blog entries) measuring strips top and bottom, I masked off the edges of all the vertical lines in the letters, and a good few of the horizontals too. 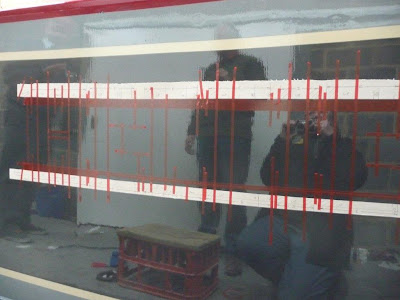 All I had to do then was paint in between the masking tape and do the freehand curves into the serifs. Easy,although the first strokes were somewhat nerve racking 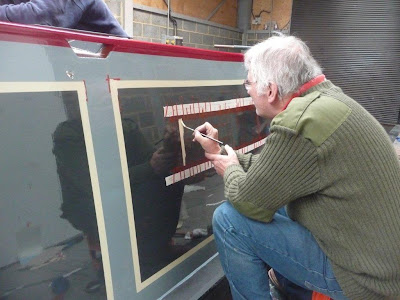 The big curves on the R and B were a different matter and they were entirely freehand. 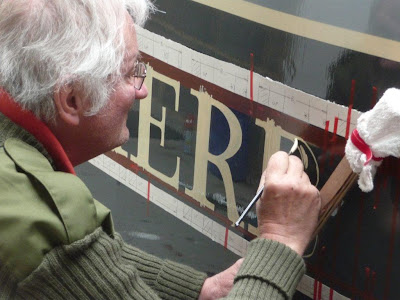 The whole effort took ages. A proper signwriter would have done a better job in a fraction of the time I took.
However, it's a start and I look forward to making it better with a few tweeks and the addition of some shading. That's just one side of the boat, I still have to start the other. Maybe I'll learn and do it better and quicker.
Posted by Neil Corbett at 11:08 pm

Looks great, Neil. One thing I've meant to say, and will do now, is that it's really good having photos of you doing what you're writing about. I take it that's Kath with the camera - thanks Kath! The last photo is particularly excellent.

I take my hat off to you. Having repainted Wand'ring Bark myself I agonised over the signwriting and in the end opted for Jim McCormack.
Having seen him work form a stick on stencil I think I would dare to try using that method - but I would still be just to afraid of a "twich" going freehand!

I agree with Halfie. It's been great having this the photos to illustrate what you are doing.