Trouble at Hanwell -am I a Jonah? 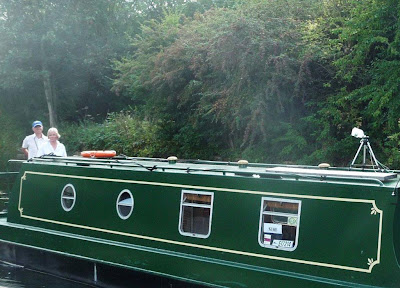 Who's this approaching the bottom of the Hanwell flight? A poor photo, so you may not be able to make them out.
How about this one taken ten minutes later? 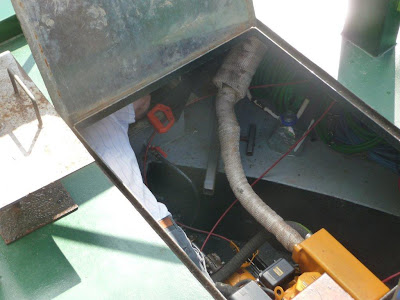 Aaawh, I knew you'd recognise him. It's John a.k.a. Halfie. At this point he has his head down the weedhatch, taking a saw to a log that is firmly embedded itself into the propellor of his boat. Not a lucky man with props is Halfie. Read his blog for details of problems that make a mere log jam seem somewhat trivial.
Always one to try to meet fellow bloggers I popped out to Hanwell yesterday to help them up the lock flight. 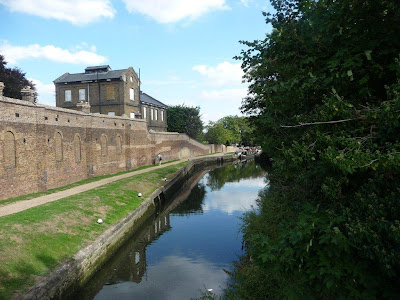 Perhaps I shouldn't have, because the log was only the start of the problems. Am I a Jonah?
Someone near the top of the flight had partially drained the pound in order to get at a welding job below the normal water line, and the consequence was that there was insufficent water to fill the short pounds between the lower five locks. So at each lock we had to send someone further up to let more water down so that the boats had something to float on.
John and Jan on Willow were sharing locks with nb Lotus. It' s good job the Lotus crew were of a cheerful disposition, because they were suffering firstly from running aground in the lock (!!!) and then from having a big piece of folded roofing felt jammed round their prop. How they kept smiling I don't know, but they did.
All's well that ends well and we finally got to the top, although John's schedule was out by a couple of hours or more. I left them to complete their run to Northolt and walked back down the flight to the car and then home.
Thanks to John and Jan for the ride, and the tea, coffee and sandwiches.
Posted by Neil Corbett at 9:57 am

No you were definitely not a Jonah! We were glad you were there to catch the rope when you were needed most! We enjoyed your company: thanks for coming to help.

Great you were able to help them Neil. As I can see it was much appreciated.