Reproduction on the roof

Herbie needs a new roof box.  The old one which I painted with its distinctive diamond pattern not long after we bought the boat, is rotting away.  Here it is just after painting, five years ago.  Incidentally, looking at the flowers in the garden I notice that it was the same time of year as now. 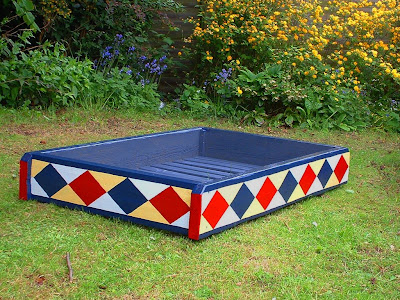 Why have one at all?  Well, it's useful and decorative.  Useful because it provides storage for our anchor, water hose, folding chairs for picnics etc, a trolley for wheeling heavy objects to and from the boat, and the occasional bag of coal.    And the brackets that hold the TV ariel mast are now fixed to it.  What would we do without it? As to being decorative, it has become a part of the boat now and she wouldn't look right without it somehow. 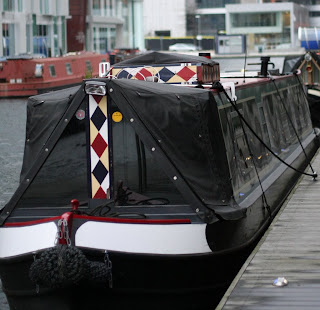 So I am building a reproduction.  Pretty much the same except of a lighter construction.  The old one was made out of rough sawn timber nearly two inches thick and weighs a ton (well a lot anyway)!  It was the creation of Roy, Herbie's previous owner.  The new one is in 18mm ply with lots of varnish coats inside and lots of paint outside. It'll have the same dimensions because we don't want to have to re-tailor the fitted waterproof cover.  After consulting my associates (Kath, Rick and Marilyn and David and Heather) we have decided on a couple of slight changes to the colour scheme. All will be revealed as work progresses.

I've decided to decorate the box before assembling the pieces.  This ought to make the fiddly job of doing the diamonds a lot easier.  At the moment it looks like this with coats of this and that drying in my lean-to shed.. 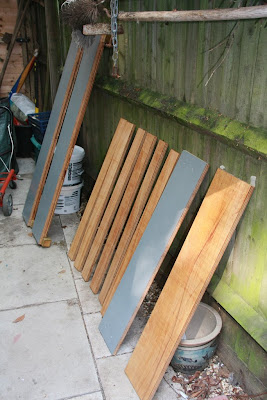 The narrow strips are slats for the floor of the box which will rest on a rail fixed to its sides.  At one coat of primer /undercoat / varnish per day it has already taken a long time, and because the diamonds have up to four colours meeting at one point, the masking and painting of them will take ages too.

I sincerely hope it all fits together at the end and doesn't fall apart when loaded.  The basic strength comes from chunky corner blocks which also act as legs for the box, and from the fixing of the slats.  Interestingly, the legs have to have a cunning angle cut off the feet to allow for the curvature of Herbie's roof.

All this is something I couldn't have achieved a few years ago, because I would have tried to build it all in one day and would have painted it after assembly leaving lots of little bits unprotected.  Old age has taught me the value of patience, so now I cock things up much more slowly.
Posted by Neil Corbett at 11:34 am

Don't you find it a problem when you have to negotiate low bridges/tunnels etc? It sounds like a lot of faff to unload and remove every time.

I have now given up putting my bike on the roof to give myself minimum air draught. We went under two bridges on the BCN recently which were extremely low (one across the Ocker Hill Tunnel Branch and the other across the entrance to the Bumblehole Branch - for the latter I even had to whip out the tiller pin at the last moment!)

The main part of the box gets under the lowest bridges we have encountered e.g. on the middle levels. The pointy bits on the ends just fold flat

I like your box a lot, Neil, but two questions. How do you keep it from sliding around? And aren't you worried that the ply will rot faster than solid wood? It seems to be really difficult to stop the dampl creeping under the layers from the ends, however much varnish and paint you put on them.