Battling through to Slough

Jena was about an hour late arriving at her spot at the Slough festival today, but in the event I was pretty happy she got there at all.   Apparently the canal only became passable  day or two ago after CRT cleared a long fallen tree, coned off a sunken boat, 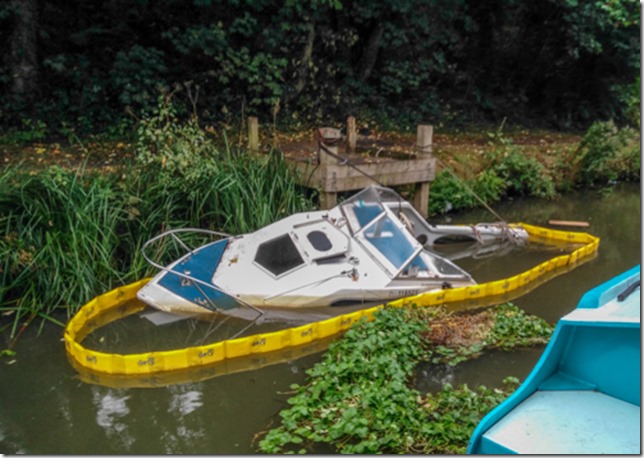 and cleared a bit of weed.

That however, was not the worst of our worries, for Jena decided to become a steam vessel when she boiled off her engine coolant after only a couple of hundred yards, despite me having topped her up before we started.  Buzzers were sounding and red lights were flashing somewhat alarmingly, so of course we stopped. While we were sitting in a cloud of steam Nb Ketura AKA Christine’s boat, passed us on their way to the festival promising to warn those it may concern of our late, or possibly, non arrival. How ignominious would that be? After cooling her (Jena, not Christine of course) down and refilling about four litres of water I let the engine run for a bit with the pressure cap off and squeezed the hoses to try to get rid of any airlocks.  Well that seemed to work and we set off again down the arm anxiously watching the temperature gauge.  My guest crew today was our little Jacob (now six feet tall and built like a brick wassname), and he had a go at the tiller showing that he has not forgotten all I taught him when he was a little ‘un.

Word had obviously spread of our troubles, ‘cos when we got within half a mile of the festival  we met a scout sent out to look for us, asking how hot we, well Jena, was. Further on down, everyone seemed to have heard of our troubles and seemed pleased to see us.

Jena has a big gangplank to allow the public to come safely on board so she has to moor with the starboard side to the bank, which meant that we had to plod on to the infamous (“Is this all there is?”) Slough Basin to turn round then make our way back to our designated mooring at the festival site.  On the way down, a boat, obviously in difficulties, came in to view. getting closer we could see it was Ketura with poor Christine lying face down on the deck with her head in the weed hatch.  The water sure was getting weedy with huge clouds of blanket weed and what looked like Elodea floating just below the surface.  In some trepidation we pressed on and passed another boat with it’s skipper also down the weed hatch.  It didn’t look good.

So you can guess what happened next. 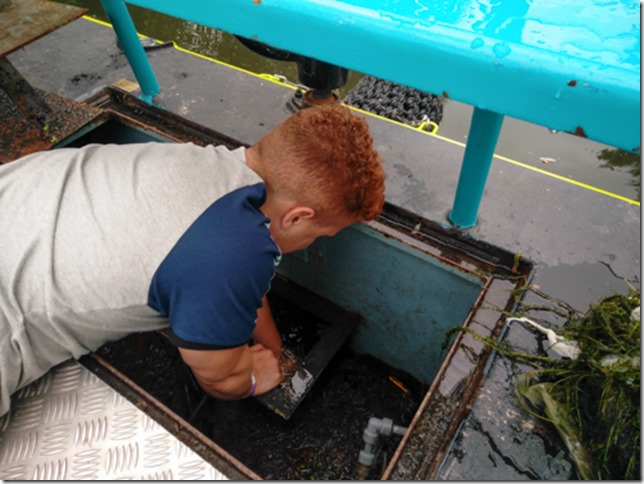 So good of Jacob to “volunteer” to clear Jena’s prop.  You can see a small percentage of the spoils on the right of the picture.

Having done that we managed, just, to keep going to the basin, turned and headed back towards the weed bank, probably now worth calling the Slough Sargasso Section, where Ketura was tying up to the other boat which would attempt to tow her backwards to the festival.  We had to press on because Sam Thomas of CRT was anxiously awaiting our arrival so we squeezed past cheekily asking what all the fuss was about.  I’m not sure that Christine was amused.

Well we made it.  Better late than never I suppose. Richard Parry was also there enjoying the rain and showed some interest in our woes, although in fairness I think it ought to be below his worry line.  Having tied up we set off in search of the famous Slough Festival samosas which were as good as ever, had a peek at the stationary engines and the birds of prey and then headed off home to calm down.

I didn’t count the number of visiting boats but it was a fair old few.  If and when the rain stops the festival should be very jolly as usual, before we go back to rescue Jena on Monday to take her back to Adelaide dock where I hope they will try to further investigate her coolant problems.  It’s never dull being a volunteer!

I wish we could have weed hatches in Dutch barges. If we get wound up, then we have to jump in the water to disentangle things.