Well hello dear Reader. Long time no blog! Well we've been busy at home with this and that, and then we came out for some time on Herbie in the Land the Internet Forgot aka Cropredy. But now we're in the great metrollops of Banbury with bandwidth coming out of our ears, so can tell you what we've been up to. 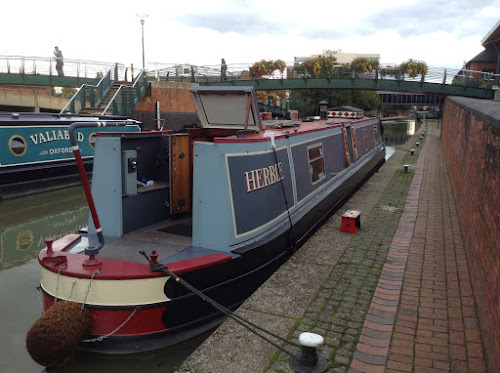 Close observers of the above photo might notice my little footstool adjacent to the Good Ship. "Aha, "you say , "he's been working on his gunnels. "

Well sort of. In the six years(!) since we painted Herbie, the paintwork on the cabin sides has stood up pretty well, except for one thing. Observe closely. 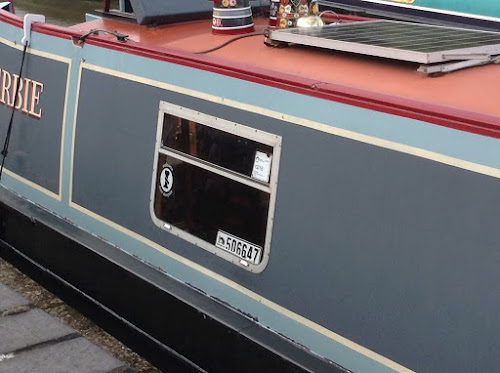 Yes, at the foot of the cabin sides where they meet the gunnels the paint has peeled a bit, revealing the old dark blue paint beneath. I could speculate on reasons for this, and I have, but whatever the cause is, I have to remedy it. Rub down, mask up a one inch strip above the gunnels and repaint.

Over a few days at Cropredy I did the port side and now it looks like this. 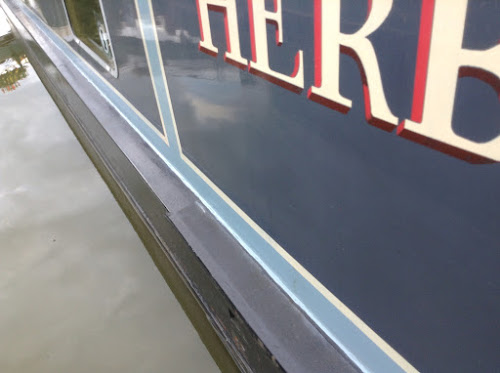 We can only get at that side on our mooring in the marina. We have a rule that we have to have the boat bows into the bank to protect the reeds. This bit of towpath at Banbury lets me get at the starboard side at a good height so I'm making a start here. I won't get it all done here cos it's four coats of paint and I only have two days. I'll find somewhere else later in the week to finish off.

You can't see it in the photo, but the old paint has changed colour considerably over six years in all weathers, so you can see where I have applied the new paint. It'll weather in, and anyway the boat already looks miles better.

It's relatively quiet in Banbury. Loads of mooring spaces. It'll be full next weekend for the canal day. We decided not to attend this year, partly because the Theme is '"bubbles" and we couldn't think of how we would work with that. I hope people don't blow soap bubbles all over the place, they're not very good for your paintwork. Perhaps they should install one of those underwater air bubble pipes like they have at Paddington or shovel a lot of methane containing detritus in the water like at the bottom of the Hanwell flight where it bloops under your boat all night.

Sometime on this trip we're going to catch a train into Birmingham so we can visit the jewellery quarter where I have promised to buy Kath a posh ring for our recent 40th(!!!) wedding anniversary. Forty years. You don't, as they say, get that for murder.

Posted with Blogsy
Posted by Neil Corbett at 5:31 pm

So glad to see you're back in the metrollops (wonderful word!) and having a good time on Herbie. It seems impossible that it's six years since you did that marathon marvellous paint job!

Just wandered down to Castle Quay and you were gone! Sorry to have missed you!