Fame at last – I get vox popped by Esther

Yesterday a group of us volunteers took CRT widebeam Jena from Adelaide dock up to Camden where she will be used this weekend as publicity support to the public open days at one of the pair of Kentish town locks next to the market.  The lock is undergoing a refurb. 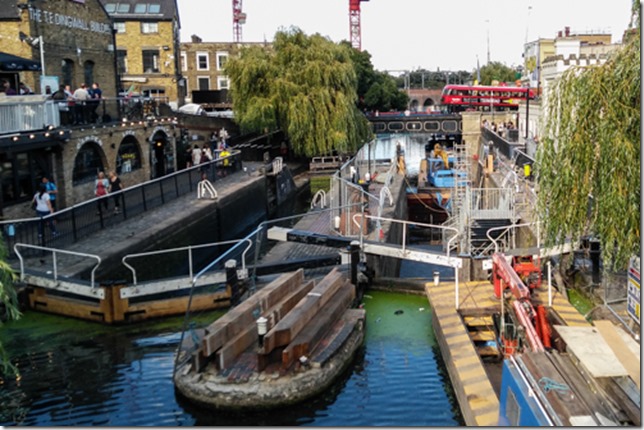 Here you can see the lock on the right all ready to receive visitors.  This is quite possibly the most gongoozled pair of locks in the land and at a similar event last year, visitor numbers were huge. One of my colleagues had the pleasure(?) of escorting Jonathan Ross as he descended into the lock chamber to have a butchers at what was going on, so we accept allsorts.

Anyhow, having locked up Jena for the night next to the Dead Dogs basin entrance, I was off to the bus stop with my volunteer colleague Mike, when someone stuck a microphone under our noses, and who should it be but dear old Esther Rantzen recording a vox pop piece for Friday’s(?) One Show.  Quite why she selected two old farts like me and Mike I don’t know. Maybe she is one of those ladies who go for men in uniform  for we were clad in CRT volunteer livery.  Or maybe she is getting short sighted ‘cos the topic in question was whether we thought men had some sort of body clock telling them to have kids before they got too old.  Personally I can’t remember that far back.  Mike  has no kids and I have growing grandchildren, so quite what our opinions were worth I can’t imagine.  For that reason I strongly suspect that our responses are probably lying on the One Show cutting room floor as I write.  However I shall now have to watch to see if I am now famous or not.  I’m looking forward to being stopped for autographs on the street.   I hope Loudon Wainwright will forgive me (I am after all his greatest fan) for quoting from his fabulous song Harry’s Wall (look it up on YouTube, it’s wonderful) which sums up the situation

On the street the people stare
and I can hear them whisper,
"There he goes there's whats-his-name,
we saw him on TV"

Frustratingly I missed the chance to slip in a plug for my novel, which I am happy to say earned me another 33 pence in royalties last month.  Thank you, dear purchaser whoever you are. I may put the money towards a packet of crisps.

Heh.
Tomorrow a rather smaller group of us volunteers will return Jena to Little Venice and then bring her back to Camden. It seems the toilet tank is rather more full than the broken indicator is asserting, and muggins gets chosen for the emergency pump-out run. Jena's toilet tank and I have a little history, since I've been the only person on board who claimed any experience with using a self-pump-out station (and there has to be a better turn of phrase for these facilities!)
Hey ho, another day, another poo-run!

Does this mean the bottom gates will now stay shut? It's the end of an era, I say!

(But isn't that actually Hampstead Road in your photo? In which case perhaps the bottom gates of Kentish Town will continue to swing open...)

Sarah - I always get the names mixed up so you're probably right. The worst really bad lock for swinging open is City Road, almost impossible to do without a person at either end.

Didn't used to go that side of the tunnel so much, though I have traumatic memories of winding Tarporley in a windy City Road Basin the day I steered through the tunnel thirteen times.

Good one, Neil! I'm amazed Esther Rantzen is still working! This made me chuckle...thanks!