A push up the Ouse.

“Where have you been? “ you may ask.  No posts for ages.  Well I’ve been busy enough – too busy sometimes, but no boaty stuff  so nothing that belongs on a boat blog.  Then just like buses coming all at once,  I did boaty things on three consecutive days this week.  I’ll do one post for each in reverse order of how they happened.

First after waiting some weeks for Strong Stream conditions on the Ouse to subside, we got the go ahead to move our Richard’s boat Bankside back from Hermitage marina where it has been repainted, to his home mooring at Hartford marina at Huntingdon.  The boat had been up at Hermitage since September, while the painters failed to get on with the job.  Having seen the rather ramshackle appearance of the little marina and experienced all the delays, I was a tad worried that they might not have done a good job, but it looks like I was wrong in that.  The finished job looks smart and the attention to detail is a lot better than I had expected.  It’s all done in International 2 pack paint over a two pack rust preventing undercoat.  The new hull blacking looks very good too.  Apparently the hull which hadn’t been blacked for far too long was in good nick.  Richard doesn’t deserve to be so lucky! I don’t think Bankside looked this good when she was new.

Anyhow, not wishing to arrive at the other end after dark, we set off soon after I arrived, dropping down Hermitage lock onto the tidal section which looked benign enough.  Time was pretty tight as we expected the trip to take five hours or more and it was already approaching noon. There was a bit of a current against us but not too bad.

Then when we reached Brownhill Staunch I remembered the trouble with this river – these locks take ages to operate because of the timers on the guillotine gates.  The gate opens a crack and then you have to wait for anything up to five minutes before you can lift the gate further, which in itself is a frustratingly slow procedure.  A watched clock goes even slower and the count down display seemed to creep along. 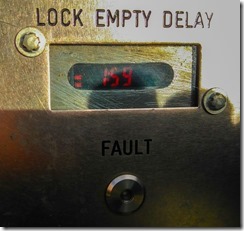 Browshill has guillotines at both ends and is infuriatingly slow.  Time was looking tighter as we left the staunch and noticed the current against us getting stronger, and as the river narrowed through Holywell and approached St Ives the flow was getting really strong, I would think about four mph (I don’t think we should use knots on inland waters).  Our speed against the bank had slowed to hardly one mph.  After a brief debate we decided to crank up the old BMC diesel to higher revs, a bit scary because it has hardly been run in the last ten years.  I was glad I had brought along Herbie’s anchor in case the engine conked out and I was watching the temperature gauge like a hawk.  It wasn’t long before we realised that the engine actually sounded happier at higher revs and our speed picked up nicely although we were still running late when we got to St Ives Lock.  I feared we would be backing through the maze of moored boats and floating cabins in Richard’s home marina in the dark.

As it turned out I needn’t have worried because once through St Ives lock the current was a lot slacker and we were soon pushing towards the beautiful old town bridge – always a treat.

Well to cut a long story short we got moored up about fifteen minutes before sunset and all was well.  Bankside now rests back at her home jetty in Hartford marina waiting for my next visit when I have accepted Richard’s challenge to sign write her with her new name which, mysteriously, is Egnabod, apparently a random word one of Richard’s teacher’s came up with when he was at school.  Richard denies it has anything to do with the fact that it is also an anagram of Bondage!

In my next post I’ll tell you about another interesting boat trip on the previous day and show you some photos I took from an alarming height.

Neil, Such a long break. Good to see you back on the air. Or should I say water.

I like that, a made up name, that makes the boat unique or in this case Egnabod,

I was about to e-mail you two to see if all's well, after such a long time blogless. Good to see that you are OK.

How very smart Egnabod Bankside looks! I rather like the plain colours, but I'm sure you'll do a grad job of sign writing/painting! Lovely photos!