Much better weather today, so we set off with joy in our hearts and the sun in our eyes (I knew it was a mistake to leave our sunglasses at home).We were soon passing the Pig Place, which seems to be breeding sofas as well as pigs, then on past the CRT yard at Nell Bridge and up to the lock, which was set against us.  Not wishing to steal anyone's lock I peered under the bridge to see a boat waiting not far back.  So I took my life in my hands and crossed the road on the bridge (people who know the bridge will know what I mean by that, it's tantamount to crossing the start straight at Silverstone and the beginning of a Grand Prix).  I waved to the guy on the waiting boat. "Are you coming up the lock?"  quoth I.  "Well I would," quoth he, "but there's this tree in the way."

It shows how unobservant I am.  There was this ruddy great willow lying across most of the canal. 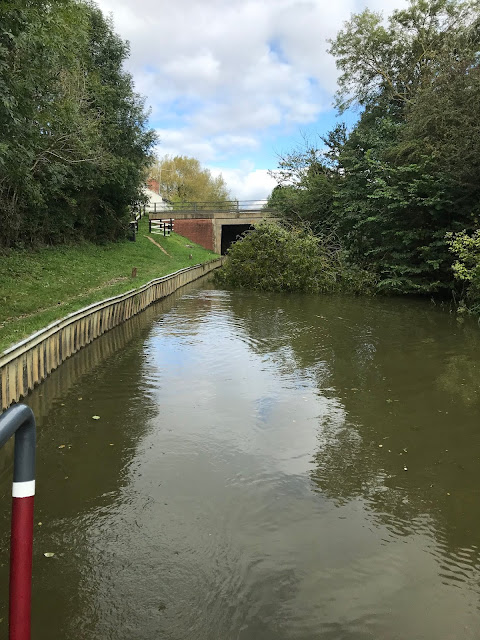 The man on the boat said he had alerted CRT and they were on the case.  "Well that shouldn't take long", I advised merrily,"the CRT yard is only 50 yards away."  I was of course pathetically mistaken in my optimism.  Apparently the job of clearing the obstruction had been passed to their "contractor".  The man phoned again for an update and was told it would be between two and four hours before anyone would show up.  Would you Adam and Eve it, 50 yards from a depot and a four hour wait for help.

This news concentrated our minds somewhat.  We examined the tree and found that it might be possible to scrape past the somewhat bendy branch tips thereon.  Nervous of our new blacking I persuaded the man to try it first, after all he was only on a hire boat which was not exactly pristine in the blacking department (sorry Anglo Welsh).  Well he scraped (literally) past and came up the lock, so Kath and I had to decide whether to risk it in the opposite direction.  The choice was a possible four hour wait or inevitable scratches on our lovely new blacking.  I was not a happy bunny.

"To hell with it," quoth I, flinging caution and probably common sense to the wind, "let's go for it."  After all, the guys may roll up in four hours and then take another two hours to dismember the tree. We descended the lock and I stood on Herbie's bow with a boat hook to somewhat ineffectual attempt to persuade away the tree's branches.  Well we got through with some scratching, but fortunately nothing that a touch up shouldn't repair.  Fortune favours the brave, but it could very easily have been a lot worse, so if anyone thinks we should have waited , they could well be right.

As for the rest of the day, it was OK, and tonight we rest at Allen's lock at Upper Heyford having treated ourselves to fresh blackberries from the local hedgerow.  I had been lamenting that we were to late in the season to get any.  I'm not often wrong but I'm wrong again.