Snakes, mice, and ladies of the night

If you're looking for a happy bunny, dear reader, I suggest you look elsewhere just at the minute.  I had just finished typing a rather long, and I hope scintillating account of our last two days and I pressed something (I know not what )and lost the flippn' lot.

As I write we're inconveniently moored by Swinford meadows on the mighty Thames.  I say inconveniently, because we didn't want to come this far, and  the river won't let us get close to the bank.

Plan A was to moor up below Eynsham lock, visit the charming village, then head back downstream tomorrow for the dreaming spires of Oxford.  Unfortunately we had failed to communicate plan A to the boats that had already pinched all the moorings at the lock, so here we are.  At least we haven't got any mice on board eating our oven gloves unlike the crew of the boat we came up the lock with.  They had wanted to pop into the village too, to purchase fresh stocks of mousetraps.  They did get to do this, but only after joining us in a joint display of mooring incompetence against the wayward current, and then unfolding a Brompton and pedalling off to the hardware shop.  They're gone now leaving us with a little pet of our own. 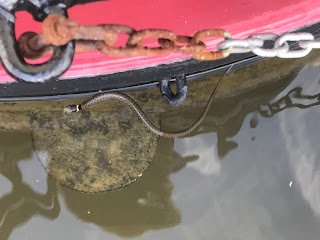 A cute little grass snake, only about eight inches long.  Fortunately I don't think grass snakes have a penchant for oven gloves, so we're probably ok.

Despite the good Doctor Bones using her project fear on us with tales of strong stream horrors on the Thames, and despite the very swollen River Cherwell putting the wind up us all the way down, it's not too bad despite all the rain we've been having.  We did have a plan B, which was to chicken out of the Thames and head down into the dreaming spires via the canal, but in the end we put a brave face on it and turned into Dukes Cut, up the silly little lock that doesn't know whether to take you up or down (up today), and out onto the mighty river. 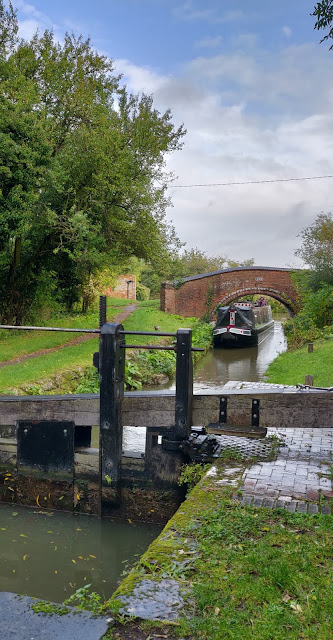 Yesterday was a lot more fun than today, starting off with us boarding the good ship Bones in Lower Heyford in search of free coffee and pearls of wisdom from lady Bones herself.  We just nattered about all the usual stuff, circadian rhythms of blind veterans, cats, dogs, stuffed barn owls, composting toilets (of course), and Queen Anne's law on permitting brothels on boats, nothing out of the ordinary for conversations with Bones.  This latter topic was the subject of a play written by, and starring, Kate Saffin who was performing same at the Rock of Gibraltar (that's the pub in Enslow, not the place near Spain) that very evening.  Bones persuaded us to abandon our plan to hit the bright lights of Thrupp and to head for Enslow instead, which was what we did.

Mooring up on the pub garden we thought it would be churlish not to go in for a lunchtime pint, so we went in to find the ever cheery Alex who made Herbie's nice chimney a couple of years back (he does after sales service too!).  Pints were followed by tea aboard Herbie and it was soon time to go back into the pub for the play, or plays actually, there being a second one about the restoration of the Droitwich canal.  It was all very sociable and we drank rather too much cider which may have something to do with us not being on top form today.

Tomorrow we head back downstream, which by the look of the current will be somewhat faster than upstream.  I hope that mouse didn't transfer over to us when the other boat breasted up.  Stay tuned.