I'm losing the plot.  All this getting ready for Christmas stuff must be getting to me.  In my last post I appear to have given fake news or 'alternative facts' as they call them in the White House.  Yesterday in Waitrose (there's posh) I surveyed the low alcohol beers and realised that my mention of Clausthaler last time was not the beer I was thinking of. It should have been Franziskaner Weissbier shown here on our camping table one dark canalside evening. See how cloudy the (0.5%) beer is compared with Kath's Ghost Ship in the other glass.

So I expect to be impeached any time.  Anyhow I'm giving it a strong second place against the remarkable Low Alcohol Beer winner which is:

And so to my other cock-up of the week.  I belatedly remembered something I could have included in the Best Boating Gadget category, so because it was a quick impromptu lash up in the rain, but it did a great job. I'm calling it Best Bodge Up.

We all have times when normal pipe fenders or rope fenders aren't fat enough to protect the boat against an awkwardly shaped bank.  On this occasion it was at Wallingford against very high steel piling where the deep indentations in the piling profile made a normal fender useless.  In the string current the boat was banging about alarmingly.  I had one go -kart tyre which I used at the bow end, but nothing for the back end , so in a rare fit of presence of mind I quickly knocked up this: 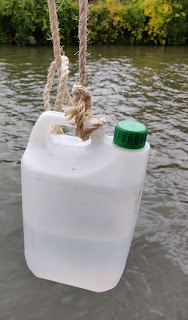 I hardly need to give assembly instructions do I?  A picture is worth a thousand words.  And did it work?  Yes it did the job brilliantly so earning it it's own special Herbie Award.

Next time we'll have nominations for Most Nervous Boating Moments of 2019.

A 25 litre drum is useful for wider gap use, used to carry two with ropes attached so that they could be deployed staked to a "pin" on the towpath for optimum positioning.

Alf, I can see that would work, but where am I going to keep 2 25 litre drums? I'd have no room for beer. Could keep beer in the drums I suppose.