Returning to Herbie after some weeks neglect, she was OK. We spent our time doing maintenance. I took a first ever look inside the morse speed/ gear control to check the cable ends and apply a bit of grease. I'm sure it had never been done since Herbie was new. Anyway it was fine.

Then we tackled the stove. I went on the roof to seal the edges of the chimney collar with some P38 filler. A little bit of water had been getting in since we derusted during the roof painting. Now we need to repaint a little area round the collar, but unfortunately the rain pout a stop toi that.

More seriously we had a good look at an ever widening crack that has appeared in the stove top. 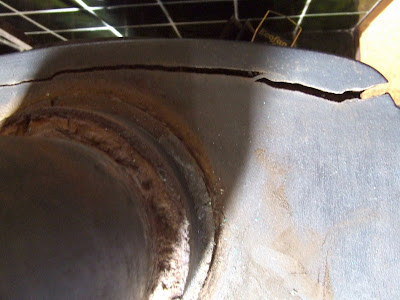 We need a new top really but we have a dilemma. Once we take the old top off it won't go back again because we'll almost certainly have to break off the retaining studs. If we then order a new top it might take some time as apparently wood burners are in great demand now that fuel prices are rising. However we don't want to order a new top in advance because there is a small chance we might need a whole new stove. We might be months waiting for a new stove and wouldn't want to be like that over winter. So we'll try and limp on until spring by filling the crack with fire cement. Luckily the crack is at the edge and we're sure that no flue gases are escaping (plus we have a CO detector near by). As you can see we also scraped out most of the old cement round the chimney base so we can re do it.

Lastly we did a serious clean of the toilet cassettes and refurbished the floats that switch the tank full light on. This latter job is not my idea of a pleasant past time, requiring, as it does, groping around inside the cassette through the entry hole trying to undo and replace little plastic clips. 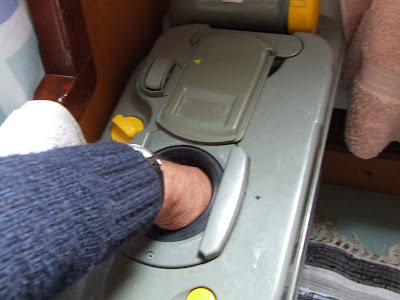 You can see nothing of course so it's all done by feel. After a long and frustrating time, I am now a master at it and we have two fully working cassettes. Our third cassette I have yet to explore because it was in use at the time. Enough said.

Kath washed the roof, and sprayed some silicon stuff on the curtain rails which now glide easily.

Not a bad result for one afternoon and one morning's work.