Bent double in St John's Wood and a mystery knocker

Last night we had a visit from Simon and Carrie and they showed us the way to the somewhat amazing Prince Alfred pub in Formosa Street, about ten minutes stroll from where we are moored. What a place! The bar is divided into series of oak panelled snugs divided by very ornate "snob screens". Impressive enough in itself, but the most striking feature is the height, or lack of it, of the connecting doors through which you must pass. Let Simon demonstrate for us. 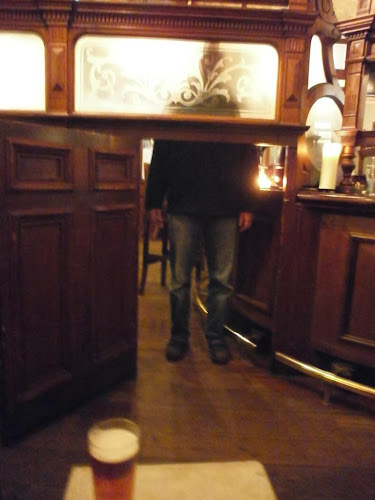 See what I mean? You have to bend double to get through each one! Unless you are Warwick Davis I suppose.

Anyhow we had a jolly time as usual and it was great to see them, and I got another recruit to read the current draft of my book.

We've been a couple of times to the Bridge House pub at Little Venice this week and we like it a lot. Granted it is frequented mostly by folk much younger and trendier than us, but the place is friendly, they do good food, albeit not especially cheap (£10 for a burger and chips, but it is a big thick home made type burger and the chips are good) and what might turn out to be a contender for the best pint award next December, to wit Windsor and Eton Knight of the Garter. Absolutely right up my street beerwise and very well kept.

Upstairs they have the little Canal Cafe theatre which we went to and enjoyed before Christmas. We're booked in tomorrow night to see their weekly comedy news review which I am hoping will be in the mould of the Now Show or something like that.

There is one free spot on a pontoon in Paddington basin tonight and about three places in Little Venice if you care to breast up, so not bad.

Now then, on to today's mystery. Was it one of our readers who knocked on the side of the boat a little after nine this morning? We were having a cuppa in bed and by the time Kath jumped out and found the bathrobe and looked outside, they were gone. Sorry we missed you whoever it was. Anyone like to confess?

Posted with Blogsy
Posted by Neil Corbett at 8:31 pm

Ah, we'll give that pub a miss - I'm not sure Richard's bendy enough to fold into a third of his height! :-)

Sue - I think it's a challnge R should take on! The doors are perfect height for dogs, as Carrie pointed out.

It's a nice pub, although I did feel guilty about the lack of beer selection for N&K...

Do you mean The Harte and Garter in Windsor?

I will be at Canalway Cavalcade this year, so will try The Bridge House for a change from The Warwick Castle, on your recommendation. It had better be worth it Matey!

Ray, No I mean W&E Knight of the Garter, an ale from the W&E brewery.