Keeping people off the towpath

We did another Towpath Ranger ride the other day, between Uxbridge and Yiewsley, principally to record and photograph points of access on to the towpath.  A record is being created for the National Access Programme, one of the points being to assess suitability of access to the canal  for people in wheel chairs and such like.  So at each access point or bridge we note the surface type and condition, width of access, steps. slopes, obstructions etc.  Also any bits along the towpath that are particularly lumpy or muddy etc.

Unsurprisingly there are plenty of places where a wheelchair user would be in severe difficulty, like the steep slopes on humped turnover bridges, but the bit that amused / horrified us most was this gateway onto the canal at Yiewsley.  If you sat down to try to design the most difficult access gateway possible you’d have a job to beat this work of art. 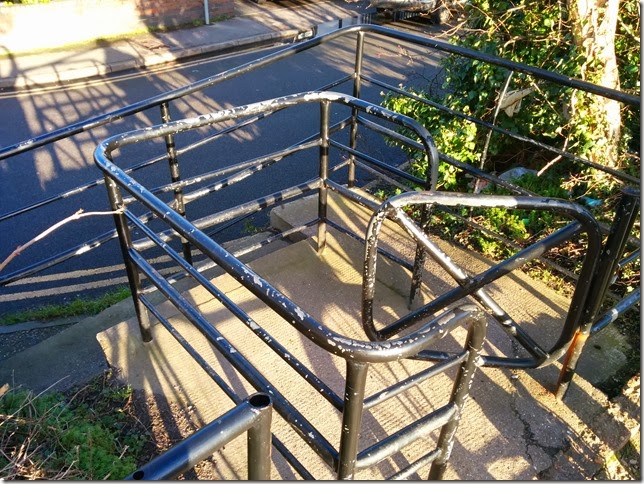 Doesn’t that just take the biscuit? I can only imagine that this was designed to bar anyone except a single person on foot.  Bikes, prams, push chairs and wheel chairs just couldn’t do it. Why!!?? It looks like something to trap sheep to give them their jabs.

As you might imagine, there is plenty of water in the canal at the moment. I reckon that the current through the Swan and Bottle bridge at Uxbridge was a good 3mph.  That might not sound much on a river, but on a canal it sure is. Of course the water is still pouring over the top of the locks although a CRT man at Cowley told me it was a lot less than a week ago.

The Slough Arm is to get some fancy signs to help towpath users to find their way to railway stations at Iver and Langley.  I have to go and take photos to help with planning the locations of the signs.  Handy for me because that’s where Herbie is at the moment and I have to go out to her Monday  / Tuesday because I’m getting somebody at High Line to fix an annoying diesel leak in the engine bay.

Anorak special soon:  I’m back to my old pastime of monitoring log moisture content with a new approach.  I’ll tell you later.

That gate would confound the greyhounds too!

Glad you're enjoying your ranger duties - I can't think of anyone better suited for the job.

Now that's what I expect in a Herbie blog, Towpaths, flooding and the anticipation of log drying!

I am fascinated by this gateway. I keep looking at it and wondering 'what on earth were they trying to stop?' Everyone except a single string bean by the looks of it!