Here’s a picture of Kath steering Herbie into a lock.  She thinks she is better at it than me.  I couldn’t possibly comment. 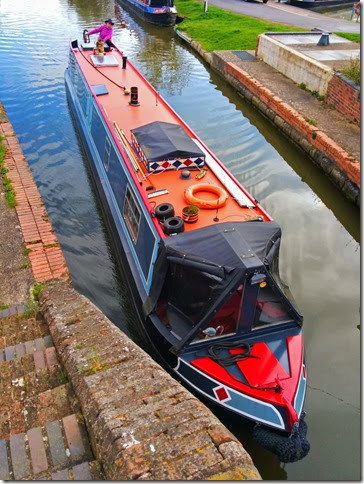 As usual on our last trip Kath was badgering all those ladies who never drive boats into locks and thus have to all the heavy paddle winding and gate shoving themselves.  While Kath is lecturing them about not being browbeaten by their husbands, the hubbies usually shuffle about looking guilty and say something like “ I tried to get her to but she won’t do it” a claim then usually hotly denied by the wife who says something like “Well you shout at me and tell me I’m not doing it right.”

What neither of them seem to understand is that both driving and lock wheeling are nice to do, but not all the time.  We take it in turns, changing over duties after every three locks.  That way we both get some exercise and some driving and if there are a lot of locks to do, the day is a lot less tiring. When Rick is with us we we all take turns and change after every two locks, so you get four locking then two driving.

Kath lectures these poor couples so vigorously that one of these days some bloke is going to bust her on the nose.  I just keep my distance.  Kath can look after herself against most men.  She has on more than one occasion been described as formidable.  I couldn't possibly comment.

I salute Kath's skill on every level - you menfolk couldn't be better trained :-)

And I agree, ladies should be driving - on the BCN Challenge it will be me taking Indigo Dream into locks at 1400 revs and practising the emergency stop - partly from skill (such modesty) but mainly because I'll take the blame for any subsequent lack of paint!!!!

As you know I am very much with Kath on this. However, since Jim has discovered the joys of lockwheeling on the bike, I get to do a LOT of steering (and I'm not complaining, to be honest, other than on the point of principle). It was slightly amusing when we came back from Langley Mill to Braunston last year, I was doing the stop lock at Hawkesbury when a man came by and said something along the lines of 'it's always you ladies doing the locks isn't it' and I had to tell him that it was the first one I'd done out of 48!

Loads of boats out on the Llangollen Canal at the moment as you would imagine!

Not one, not one had a tiller girl!

Oh except MY boat!!

Jan usually steers through the locks while I do the heavy work: we both prefer it that way. Buckby (heavy-ish) and Watford (light) - whoopee!

Carrie says I don't like being seen driving in a lock while she's working the gates... ;-)

I got called formidable once. I asked if they meant the english or french meaning. They said 'both'.

Carrie says a better word for Kath is 'merveilleuse'. ;-)

Well I to agree with Kath,
After we took delivery of AmyJo Chris had a restless nights sleep one weekend as next day we were to do the Watford locks and she was determined to steer AmyJo through them.

Off course she made and excellent job of it, barely touching the walls and I have to say am proud that she plucked up courage to give it a try.

Come on ladies what would you do if something happened to your men folk and you had to take the helm, could you do it confidently?

I hand over the tiller AND the windlass fairly reluctantly! I want to do it all :-)

Go Kath go! I agree wholeheartedly. Women who do not learn how to do everything their partners do may one day find themselves without a partner and unable to do anything at all. Les and I take turns with steering and locking. He is thrilled to bits to have me drive so he can just sit back and enjoy the view.

We came up through the staircase locks in Chester two years ago with a man steering and his wife locking. He was totally angry and upset he had to share the locks with a woman at the tiller of our boat! I managed to restrain myself form sticking out my tongue at him as he charged out ahead of us to get away from me!
JaqXX

we share things out, but the steerer doesn't get away with just standing on the counter, whichever of us is doing it normally closes the gate the boat has just gone through and often opens a paddle on their side. If the locks are close together, the lock worker sets off to the next once all the paddles are open, and the steerer opens and closes the gate and the paddles.

It's much quicker, but means that both "jobs" are hard work!

We don't have that much chance as work stops us going out so often, but locks for us mean mixing it with the heavy mob and so we mostly do what we're best at: me climbing the yukky ladders to put the ropes on the bollards at the top and Koos steering to keep a distance from the commercials! No DIY stuff here in NL. We are at the mercy of impatient lock keepers who want it done and want it done fast!