Braunston rally in the sun!! 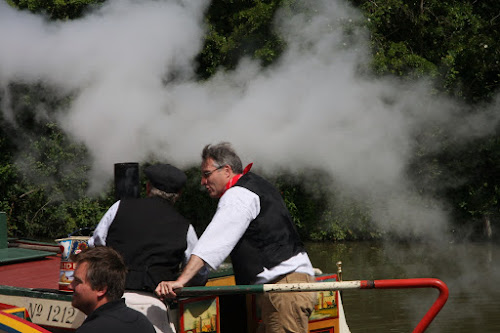 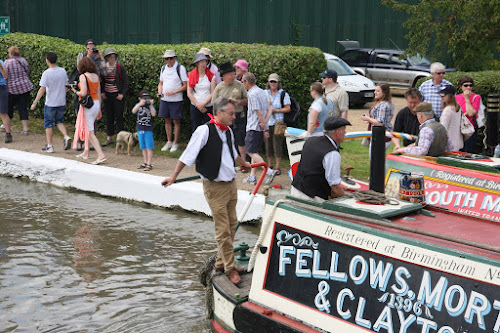 Who is this handsome fellow reversing steamboat President into the arm at Braunston marina? Why, 'tis not other than our glorious leader Richard Parry (Chief Exec of CRT). I think he might have been getting a bit of instruction at the time, but he made a good fist of it. We'll make a boater of him yet.

I missed the other (human) stars of the show, Tim West and Pru Scales, on account of arriving late at the parade 'cos we had a problem on Herbie. We awoke to find our Smartgauge showing the batteries at a disastrous 20%, having gone to bed the previous night at 90%. 24 hours later after a few investigations and consultations with professionals (plenty of them here at Braunston) it looks like our five year old batteries, or one of them at least, have finally given up the ghost. Aah well, they are long, long past their guaranteed date. Everything else seems to be operating normally, so on a Monday morning we can pick up a new set as we pass Wharf House. Simples.

When we did arrive at the parade, the old boats were looking fab in the sunshine. Sarah and Jim are forever trying to persuade us that we should get one, and I nearly had my hand in my pocket, but luckily none were for sale.

The Braunston Rally is a wonderful thing on a fine day. The really excellent brass band plays stirring stuff as the man on the PA gets mixed up and talks about the wrong boat (not all the time), as the boats narrowly miss demolishing the Gongoozlers cafe and swing through the old iron marina bridge. As the years go by it seems more and more of them have lovingly restored paint jobs and the bright reds greens and blues look terrific in the sunshine. Not to mention of course the gleaming brassware. 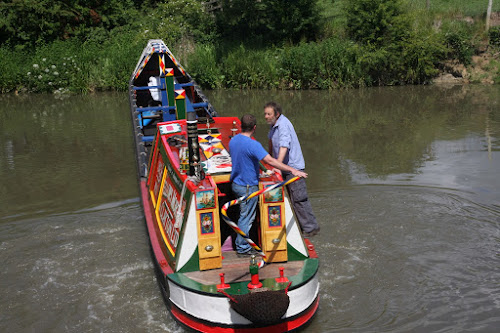 Later we had a guided tour of the latest improvements Jim and Sarah had made to Chertsey below decks and in the evening had a jolly time in the dangerously near sold out beer tent, trying to hold a conversation above the rather good but rather too loud blues band.

Posted with Blogsy
Posted by Neil Corbett at 10:48 am

Your third picture did not include Richard Parry.............did I miss something?