Carpe diem, as the old saying goes ( usually translated by Rick as " Fish of the day."). We found ourselves with a "window" yesterday to have a couple days out on the boat, so we grabbed our kit bags, jumped in the car and headed for Crick. Only when we were half way up the M40 did I check the weather on my smartphone app. "Crick - wind 47 mph." Cripes!

Needless to say we didn't attempt to take the boat out of the marina, which is windy at the best of times. Had we tried to do so we would likely have wrecked numerous other boats in the process. The wind was precisely sideways on to us. Instead we opted for an evening at the Wheatsheaf where we were very pleased not to come last in the quiz, although we made a fair stab at it. As usual, the music round was our undoing. I know a hell of a lot about music, but apparently nothing about the music most people like. I listened to Popmaster on the Ken Bruce radio 2 show today and scored a magnificent Zero.

The weather is a lot kinder today so I am writing this from my easy chair on the towpath alongside Herbie somewhere remote along the Leicester arm. Most of the Leicester arm is somewhere remote as many of you will know. Scrabbling through the hedge to look West we can see bits of the ever growing Yelvertoft wind farm. I bet they were putting out a few amps yesterday. Although now resting, I have not, dear reader, been entirely idle. 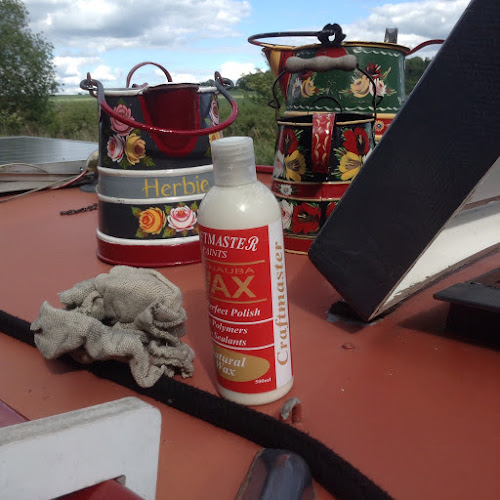 Yes, two thirds of Herbie's port side is now waxed and shiny to match the starboard side I did last time out. Just 20 minutes more work should finish her off, although if I hadn't stopped when I did I think it would have finished me off. Hard work, polishing boats is.

If the cloud cover doesn't get too much we should see plenty of stars tonight. There ain't much light pollution out here I can tell you. I have recently got a bit interested in astronomy and have been reading up on it. Already I can recognise the moon and have a fair stab at Jupiter and about three stars. Brian Cox eat your heart out.

Posted with Blogsy
Posted by Neil Corbett at 6:27 pm