Charge your champagne flutes folks and stand by to toast a special person. We've been honouring good people with our Herbie Special Awards for quite a few years now, originally for being a valued crew member then later for selfless acts of Fortitude, Hospitality, and wotnot.  Sometimes these are awarded because of our admiration, and sometimes for our gratitude, like when we gave it to the gang of pals who helped us paint Herbie.

This years winner certainly deserves my gratitude.  Although I have no proof I also strongly suspect that a number of other boat bloggers feel the same.  "Why bloggers?", you may ask.  Let me start at the beginning.

It being very nearly ten years since I embarked on this malarkey, I've been looking back at the stats that Mr Google kindly supplies about the blog and its visitors. This tells me that this is the 1400th time I have sat at a keyboard  (or a tablet) wondering what to write. After all, why do I do it?  It started off a s a sort of diary, but now it is a way of communicating ideas and information I suppose, and sometimes it's just a bit of fun, trying to amuse or entertain a few people.

What keeps me, and probably other bloggers, going is knowing that people out there read this stuff and like it.  We can look atthe stats for reassurance(179 people dropped in to have a look yesterday, half of them probably searching for Herbie the Volkswagen on Google), but what inspires me a lot more is when kind people take the time and trouble to comment on what I have written.  It also makes me feel incredibly guilty that I don't often do the same. The stats tell me that this blog has collected 2682 comments over the ten years, everyone precious.

Now we come to the crunch.  One lovely person has contributed no less than 561 of those comments - a staggering number you'll agree. I know because I have just counted them, and each and every time those comments have been warm, friendly and supportive.  It means so much.  I'm sure this same person does a similar service to other bloggers out there as I can't imagine that I have been singled out.  So it is with deep gratitude and affection that we give this years Herbie Special Award to someone we have never actually met.

She is a boater, a writer (about boats among other things), a blogger, and we like to think, a good friend over the water(in the Netherlands).  She is

(aka Vallypee
aka VallyP)
See her blog here 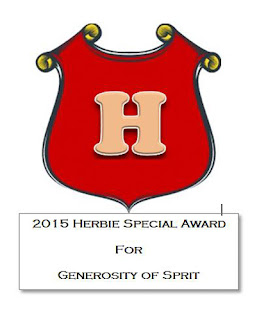 Thank you so much Val, on behalf of all of those you so generously (and frequently) support with your kind comments.

Huge round of applause as the bloggers rise to their feet.
Posted by Herbie Neil at 6:00 pm

Oh my!! I'm totally bowled over! Neil, bless you! I was absolutely not expecting this when I clicked on Herbie blog just now. And I now have a very large lump in my throat that will need swallowing with a glass of good red!

But....I should be thanking you! I've loved your blog ever since I discovered it back in either 2007 or 2008 - I'm not too sure which it was now, and even though there've been times I couldn't follow it as I've always wanted (the thorny issue of some necessary studies got in the way for a couple of years), I've so enjoyed coming back here. Neil, your blog is always interesting, always makes me smile and is always somewhere I enjoy coming...it's a bit like home in blogland. I'm immensely touched by this, but without you, blogdom would not be the same! Big hugs to you and Cath and I really really hope we'll meet one of these days!

Cheers to you too! Have a wonderful Christmas and I'll look forward to the continuing travels with Herbie in 2016 :) xx

An excellent choice Neil and Cath and made to someone I only got to know recently after reading two of her books (both recommended reading for boaters). Well done Val, so just sit back and bathe in the glory. Ray

A very worthy winner - enjoy the fame Val, your life will never be the same again :-)