I've been having a geeky week. if you are a technophobe, I would look away now if I were you. Our son Peter is home for Christmas and the two of us have been having a loads of fun  playing with microcontrollers and electronic bits and pieces, doing daft things like making his simple little bluetooth powered temperature monitor and putting it in the freezer and plotting temperature graphs with data arriving on the PC. 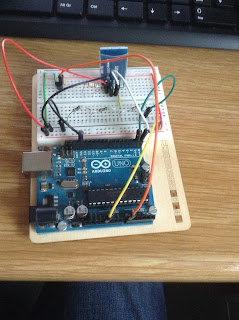 We could knock up a version of this a couple of inches square if necessary. Using this sort of stuff it wouldn't be all that hard to build monitoring devices to keep an eye on Herbie while she is moored up and we are at home.  For instance we could monitor the state of the batteries and keep an eye on the temperature in the boat and get daily results on our mobile phones.  But here we come to catch 22.  Keeping the technology running on the boat would probably use up more battery power than we could afford to waste.  Although these things take very little power, when they are on for 24 hours a day for weeks on end, it adds up, especially keeping a dongle charged up to send phone messages or to keep a little web server charged up..  Of course in the summer the solar panel would easily take care of that, but in the short gloomy days of winter, I'm not so sure, and of course that is precisely the time of year when we might need the data from the boat.

Anyhow, just for fun, here's a little puzzle for you if you are scientifically inclined.  This is our graph of temperatures against time. 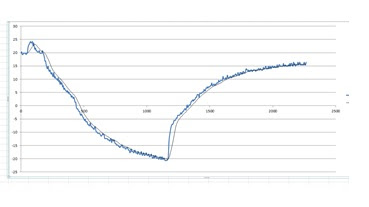 Don't worry too much about the detail.  It starts off at the left with a little kink where Peter handled the temperature sensor - ignore that. Then we put the device into the freezer and as you can see the temperature slowly dropped to about -20 deg C in a reasonably smooth curve.  Then, and this is the interesting bit, we took the gubbins out of the freezer and the temperature at first shot up much faster than it had fallen before resuming a more normal curve.  This seemed very strange until Peter worked out why.  Where did that sudden boost of heat come from?  Nothing to do with our handling, or where we put the gubbins really.  Peter realised what caused it, but can anyone out there think it through?  A clue - we could see the cause.  Answers next time.


We paid a quick visit to Herbie yesterday just to check that she was OK (she was) and that her batteries were not getting run down by the Airhead loo extractor fan.  We haven't had much daylight over the last month what with the days being so short and the skies being so gloomy, so I was wondering if the solar panel had been doing anything. Doing a quick sum based on the toilet fan requiring 60 milliamps and running 24 hours a day, it should have used up about 72 amp hours since we last ran the engine which is suppose is about 25% of our total battery capacity, so I was relieved when the old Smartgauge showed we had used only about 9%.  The solar panel was making about 0.2 amps at about mid day yesterday.  It would have been making more if we had it raised to the optimum angle, but with this stormy weather it wold probably blow away if we left it like that.  Anyhow as we hadn't "made a donation" into the loo for several weeks we felt it safe to turn off the fan now and let it get on with composting.

My guess - heat generated by the device itself. Not only would this make it warm up quickly, it would cause it to cool down more slowly, thus increasing the difference between the two curves.

No prizes for me as I wouldn't have a clue, but may I say I'm really more and more impressed by these solar panels. I have to get one, I really do. Given the weather and the short days I think it's fantastic that you are getting anything through at all. Actually, it's your posts that have convinced me they are a 'good thing', so thanks Neil!

Unless you were in a very dry environment, water vapour would condense on the cold sensor and would freeze, thus releasing latent heat and warming the sensor quickly. As the temperature rises and the condensation evaporates, the evaporation will draw in latent heat and slow the warming. Add in the reducing temperature difference which slows heat transfer, and the graph is -sort of- explained.

My guess is that ice formed on the sensor as it cooled and insulated it to some extent; when it was removed from the freezer the frosty insulation fell off and the device was able to warm up quickly.

Was the sun shining in through the window onto the device?