We’re back home now after what must be a record breaking cruise for us.  In just over two weeks we covered only 20 miles (10 miles each way). Not exactly pushing ourselves you might say.  However we had a good time, meeting friends in Banbury, generally mooching about and doing a bit of painting.  The furthest we got was The Pig Place, just North of Nell Bridge lock where we managed to find a spot with a TV signal to watch the Grand Prix. 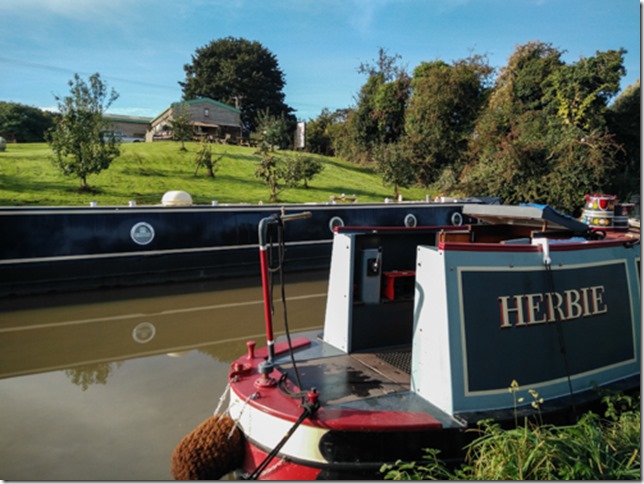 The Pig Place is probably not a good place for vegetarians, because you can go and scratch the piggie’s backs and then go to the shop and buy the pork chops, but at least you know you are getting meat from well looked after and happy pigs.

Then next day we tootled back to Banbury in what I can only describe as the perfect day for cruising.

The canal was quiet, the sky was blue, and the sun was on our backs, not too hot so the air was fresh. The hedgerows were bursting with hawthorn berries, rosehips and crab apples, and, the locks were all in our favour.  I can’t remember a more enjoyable cruise. Perfick!

I remember someone once telling me that in an average year, there is only one day when conditions are right for boat painting. Well, I must have missed that day this year.  It’s been too hot, or too cold, or too wet, or too windy, but some stuff just couldn’t wait another winter, so I had a go anyway.  The most urgent bits were the sides just above the gunnels, which I already told you about, so I got them done last week, and much worse, the front part of the cabin roof.  Too many times have I left bags of coal up there.  Don’t do it folks, the wet gets underneath and if you leave the bags there it eats the roof.  Gert big flakes of paint were coming off, the rest of the paint was blistering and the rusty bits beneath had got very rough, so despite unsuitable weather I set about sorting it.  First wire brushing and sanding, then Fertan rust treatment (easiest and best), then sweeping,  washing and degreasing, all of which can be done in any weather (except possibly snow), then painting.  I’d left it too late in the year really. In the morning there was a heavy dew all over the roof, and by the time that had dried off there wasn’t much time to paint so that it dried enough before dew returned in the evening.

Never mind, one thing I have learned about painting bits of boat is that it is best done at high speed in order to keep a wet edge.  I waited until about mid day, then used a nice big brush and went as fast as I could,  finishing with a top coat yesterday.  Actually painting large areas quickly is very therapeutic.  I’ll put some more top coats on next chance I get.  Stupidly I forgot to take pictures of the damage before I started, so all I can show you is during and after.

Imagine it all rusty and cratered, then after prep and primer and undercoats ready for the top coat 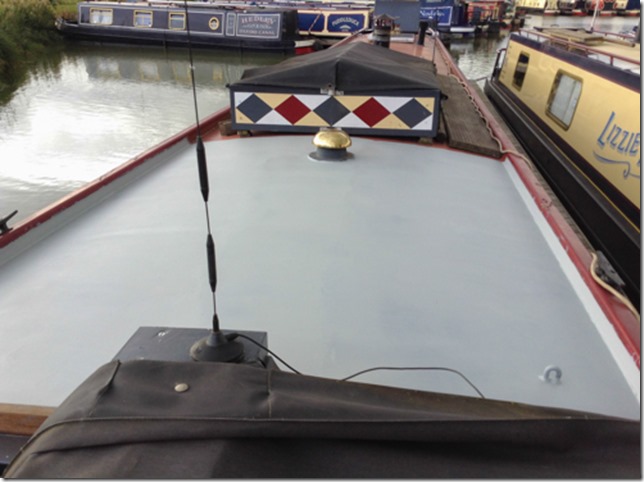 Then after about 15 minutes painting the top coat – voila! 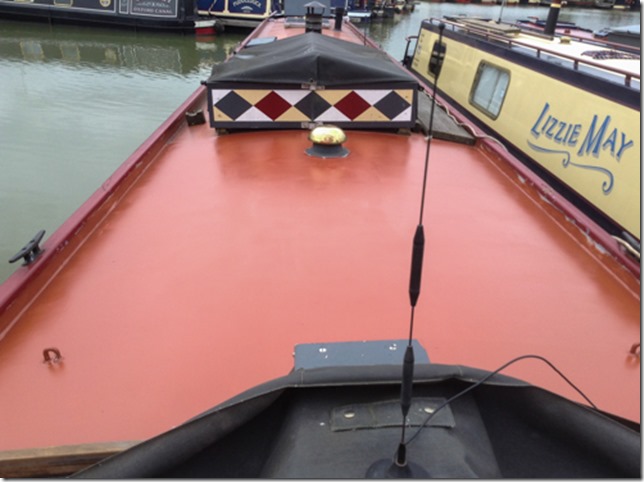 Please ignore the missed bits under the hand rail, I’ll do them later with a smaller brush.

Inspiring, Neil, as I have to attack the roof on Waka Huia next year. Thank you as I was really dreading doing it!
Cheers, Marilyn

Oh well done you! Your cruise sounds ideal and the painting has at least got done. I still haven't finished mine!

In just over two weeks we covered only 20 miles

I'm jealous... I wish I had more time to pootle about. Brentford-Bath-Brentford in three weeks? Daft!