Coo, I’m cream crackered.  Having retired from work eleven years ago I had forgotten how tiring commuting was. Helping out with the CRT Quietways consultation cruise on just four days this week was fun, but I’m glad it’s over.  All that sitting on rush hour trains to get to the boat and back is not my idea of fun.

I haven’t seen the final figures but we might well have spoken to a thousand towpath users and had proper conversations over the details with a couple of hundred of them.  Our boat Jena stopped at West Drayton, Hayes, Southall, Greenford, Alperton, Ealing, Meanwhile gardens (near Ladbroke Grove) and Paddington.  On the bank we gave out maps, leaflets, free bicycle bells, poop bags for dog walkers and more leaflets.   On board we had photos of key improvement sites, maps, schedules, and even engineering drawings of the planned towpath improvements.  People came to see the information and ask questions, support the plans, express concerns about the effect on wild life, complain about encouraging speeding cyclists, check there would be space to drive in mooring stakes, eat free biscuits, ask unrelated questions about what it costs to live on a boat, or how to walk to the zoo – we had all sorts. The lady from Towpath Talk came over yesterday and took notes and photos, so you’ll see that after Christmas. In general, the reaction was pretty positive.

By the end of each day we were surprisingly tired. Here’s volunteer Ken, still keeping vigil in the dark while luckier folk across the canal were enjoying the pub. 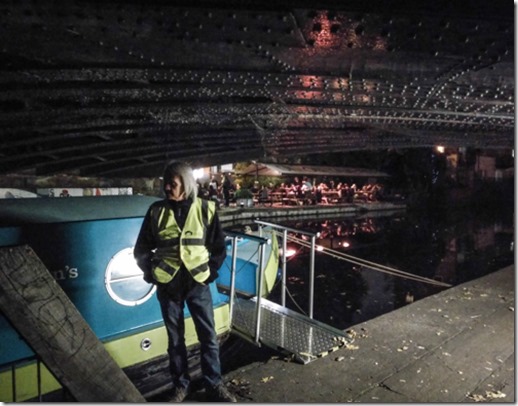 We did have some friends under the bridge to keep us company.  By that time of the evening the spiders under the bridge were doing rather better at ensnaring their prey than we were.  I suppose they benefit from the lights brining in the insects. 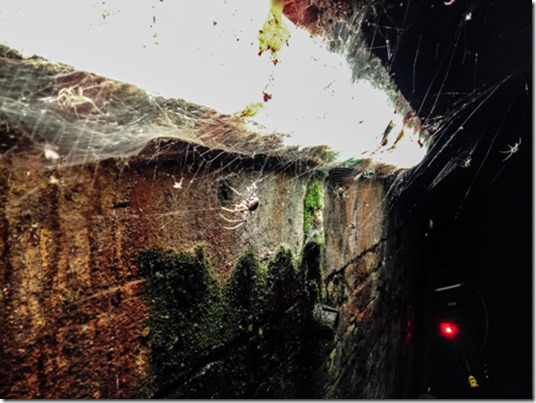 Over at Paddington yesterday we were a tad more comfortable 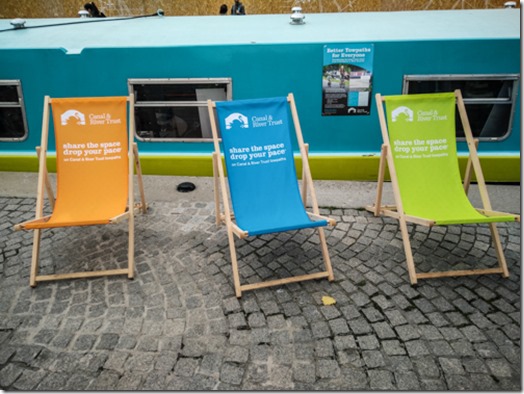 So what were we telling people about?  (Please note that I am writing here only what I have observed and learned and that this does not in any way constitute official CRT information.) That between Ladbroke Grove-ish and West Drayton (that’s about 15 miles) over a two year period the towpath will be improved to a new standard creating a new path surface between 1.8 and 2 metres wide, plus a 500mm strip of level grass either side and the hedgerow vegetation trimmed back ( not in the nesting season) and overhead to create more space.  No more muddy puddles, no more cycle ruts, no uneven surfaces, and more space for people to get past each other.  There will also be a significant number of access points (already identified) where improvements are needed where current steps and ramps are unsuitable or in poor condition. Finally there will be improved signs. (I think CRT might call it signage GRRRR!!)

I had a look at the cross section drawings for the new towpath surface which is to the latest spec. I didn’t understand all the details of the materials, so don’t quote me on this but it looks like a sub structure of aggregate, smaller in the middle and larger at the edges for lateral stability (not under the grass verges), then a layer of some sort of bituminous material (that might not be the right word but you get the idea) on top of which is sprayed and stuck a top layer of a much finer stones to give a smooth but grippy surface. It will of course have a gentle slope towards the canal (1:50 I think) to drain off surface water.

The sample pictures make the towpath look much lighter and more spacious, and the benefits claimed are a safer, cleaner environment for towpath users.  You never know, the more open environment might even discourage some of the oiks from littering and vandalism. (I’m an incurable optimist) The downside could be that cyclists see it as a race track.  Increased efforts will be made to calm them down and those wishing to get somewhere in a hurry will be advised to choose another route. Well, we’ll have to see about that one, it won’t be easy, but at least there will be more space to overtake walkers.

The money is coming largely from Transport for London and the London Boroughs although CRT will meet some of the costs.

To be frank, there isn’t a lot in this for boaters, but this is London folks, where the towpaths are really heavily used by other people.  The evidence of my own eyes and ears this week is that lots of Londoners and visitors really do value the canal environment so that’s no bad thing. At Paddington yesterday we were joined by the “Chuggers” recruiting “Friends” who sign up to make regular donations to CRT, and I was surprised to see that they signed up quite a few.

I don’t see this type of towpath environment being at all suitable for non urban or suburban areas, so I wouldn’t worry that your local stretch of grassy bank is likely to suffer the same fate, but I’m sure that it would be welcomed in some popular but notoriously muddy areas. Braunston locks springs to mind.

PS I can confirm that you can turn a big boat like Jena at the closed off bridge hole just past Sainsbury’s near Kensal Green. Just!

Hi Neil, At the Dept of Conservation in NZ, what I would call signage is called interpretation - howzat for expanding a word's meaning? Warning signs are warning signs, but any sign providing information about a site, historic or environmental, is interpretation - I have grown to love it, esp as it makes it easy to determine whether it is in the scope of my contamination remediation projects: warning signage is, interpretation isn't. Simples, as you would say!
Also, I have discovered (more correctly, learned) that in NZ bidum cloth is used under roads and pathways to stabilise the underlying material and prevent scouring. Is that what is being used in the northern hemisphere, in particular in the towpath construction perhaps?
(If you haven't guessed, I love my work - it is so neat to be learning new things in my mid 60s, and my fortnightly commute is on a plane down to the South Island and then on another plane over the Southern Alps - magical!)
By the way, I thought about you and your volunteering when we stayed on nb Jessie as an airbnb venue across from Rembrandt Gardens the weekend before last.
Cheers, marilyn