Towpath Idiot of the Year Award

Should the Towpath Idiot of Year Award go to the bloke who drove a motor bike straight at me yesterday, or should it go to me for deliberately standing in his way ?  Read on.

There we were, at West Drayton, doing our bit for the Trust. Our big boat Jena was moored just by the bridge, on board an exhibition showing the plans for towpath improvements 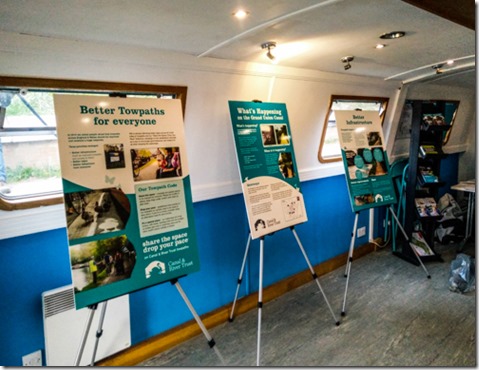 lots of charts, maps, leaflets etc and a few of us on hand to explain and answer questions.  Outside the boat we were accosting passers by and generally having a sociable time. 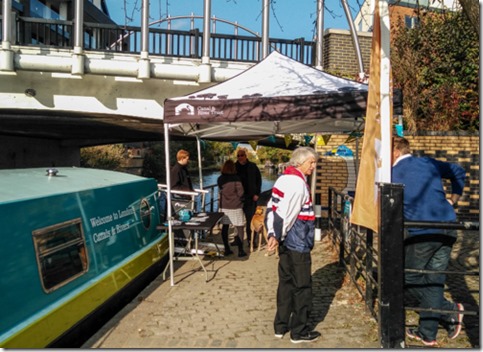 Then from under the bridge a young man appeared riding a trials type motor bike.  A couple of the CRT staff stopped him and asked him to take his bike off the towpath, it being illegal and unsafe.  The young man wasn’t at all impressed by this advice(surprise surprise) and forced his way through.  I was standing on the path pretty much exactly where I stood to take the above photo, so I thought I’d have a go at stopping him, standing in his path with my arms spread.  So what did he do?  Open the throttle and drive straight at me.  I thought he would stop when got to me, but he didn’t.  Luckily I remembered my matador’s training (OK that bit might not be true) and just got out of his way at the last millisecond.  We collided, but not heavily and he broke through and escaped. You might (or might not) be glad to know I was unhurt physically or psychologically, although I did spill the coffee cup I was holding, but it could have been much worse.  I’m sorry to say  although this was the first time I have been charged down by a motor bike, I have on a few other occasions been charged by nasty pedal cyclists refusing to stop.

Well, we thought we’d better alert Mr Plod so we dialled 999 and twenty minutes later two very nice constables arrived in a squad car and took down the details.  Naturally we couldn’t agree on how old the miscreant was, or what colour his clothes were etc etc. because it all happened very quickly and he was gone.  The policemen told us that motor bike towpath complaints were frequent in the area, a fact we already know because we did a little investigation of our own a year or two back.

It was all a bit poignant because only a week or so ago a couple of CRT guys who I know but will not name, were attacked by cyclists on the towpath near Southall.  That was much much worse and knives and bike chains were used against the staff.  Luckily no serious physical injuries were involved although as you would expect they guys were badly shaken up and are now understandably nervous about being out on the towpath in such places.

The official CRT advice (especially to volunteers) is of course not to get involved in confrontations, just walk away, but in the heat of the moment it’s hard not to try and stop people who are being complete bastards.

You’ll be glad to know that the rest of the day was fine even though we moved on to the notoriously dodgy area by Hayes bridge. and all in all we had discussions with about 120 towpath users virtually all of which were pleased about the improvement plans.  Today Jena moves (without me) to Uxbridge Rd moorings and then to the Black Horse.  Should you be passing by, do stop and learn about the coming improvements and give your views. You might get a sweetie and a cup of coffee.  Yesterday they even had Jaffa Cakes.  I’ll be back on board on Friday as we move ever closer to Paddington.

Sorry to hear if your altercation. But, good for you, on standing your ground and at least trying. As a towpath user, this has happened to me more times then I care to remember.
My best course of action, was whilst with a group of friends (who just shrugged their shoulder on seeing the approaching motorbike) , I took such a stance as you... I was fortunate the miscreant stopped, but misguidedly shouted at me to stop..
It may be worth noting, I am a middle aged, short, fat, grey haired lady with a walking stick, and was as mad as hell with both him, and the inaction of my fellow towpath users. So, I duly informed the young gentleman, he had two choices. 1) to remove both himself and his motorbike from the towpath, or 2) have the keys removed from his bike, where upon he was welcome to go fish for them from the canal, and shortly after his bike and himself would be joining the keys in the canal.

He decided that he would get of his motor bike and walk it back to the nearest towpath exit. He was aged around 40. Never had any more trouble on that particular stretch from motor bikes again. Now cyclist are a different matter......

What a terrible thing that man did, Neil. He was playing a very dangerous game there! You were not the idiot and he was worse than one.

Neil, That is very scary! Awful to think that there are such mean and nasty people around with no concern about another's safety.

I suggest a go-pro camera mounted on your head - sort of like a dashcam to record miscreants. That way there is no argument/dissension re what colour his hoodie was or his eyes, height etc.

Glad you are OK - shaken but not stirred!

Marilyn, yes we have been discussing the dash camera idea, perhaps mounted on Jena. As there are often three or more of us, we can't all wear cameras. Not sure either how we would screw one into my skull��

Re camera mounts, if you want user experience of 'screws in bone' I suggest Guy Martin as a source of current information.
More seriously, the Police around Derbyshire, and I think in other areas as well, have settled on body cams as being the most practical choice. I'm not sure (no research) whether they clip on clothing, as the radios, or if they have a separate harness to go over whatever other clothing is worn.
Obviously, standing square on to the miscreant brings you the best shot.
Keep up the good work!!