Last week we happened to be driving past our local fire station and noticed large crowds around it.  Yes, it was one of the open days they sometimes do at half term holidays.  Having Grace with us, we thought we’d take a look.  There was lots going on and some interesting demonstrations that might make you sit up and take notice.

The first was chip pan fires.  They lit a gas ring under a pan of oil and left it for about 15  or 20 minutes.  Eventually it began to smoke heavily and then spontaneously burst into flames. Time for a demo with the old fire blanket  which did the job nicely at first, but they took off the blanket deliberately too soon and the flames came straight back.  Leave the blanket on folks. 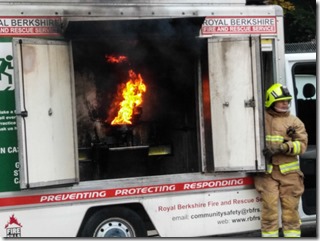 Then came the exciting bit when the Fireman turned a tap and sprayed the pan with a little bit of water.  Now we all know that’s not a good idea, but the results were spectacular.  This is one second later: 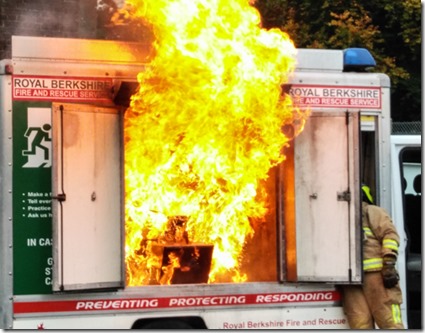 I don’t think Grace will be putting water on a chip pan any time soon!  When we got home I got her to do a bit of fire blanket practice – not using a real fire I hasten to add.

The next demo was possibly of more interest to boaters. 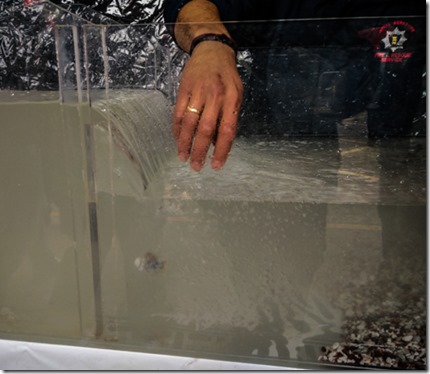 Can you see the little Lego man under the water?  He was dropped into the water at the right of our picture where he floated quite happily until the circulating undertow from the weir drew him upstream and then sucked him under where he stayed, just spinning round and round.  Don’t fall in in a weirpool!

Lastly they showed us what happens when they cut a driver out of a crashed car.  Nothing to do with boating, but most of us have got cars so I thought I’d share it with you.  This was quite an eye opener for me at any rate.  It’s not just a matter of getting the hydraulic cutters and snipping through the corner posts. 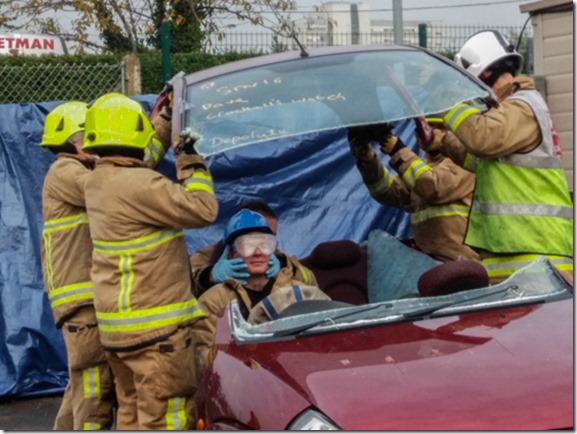 The first job is to try and get someone else, preferably a paramedic, into the car often through the rear window.  His / her job is to do the obvious injury checks, but equally importantly to protect and support the driver during the rest of the process.  In particular there is a risk that the trapped person may suffer a spinal injury by moving their head, so they sit behind and hold the head still while all the cutting is going on. They use boards to shield the occupants from the broken glass when they smash the windows, having first covered them with sticky film.  A special bag is placed over the steering wheel to restrain the driver’s airbag should it go off during the rescue, otherwise it can cause more injuries.  A lot of creaking and banging goes on whilst the door hinges are burst so they can remove the doors. Apparently the hydraulic cutters are very heavy and can’t be lifted for more than a couple of minutes before someone else has to take over. Having got the doors off, you might expect them to pull out the trapped driver, but no.  He might still have a neck injury so off comes the car roof, so they can lower in a long spinal board between the driver’s back and his seat.  Then they recline the seat if they can and slide the driver now flat on the board out through the rear screen.

The teamwork was very impressive.  They were keen to point out that complicated as it seemed, this was an easy example with the car upright and not crushed.  Speed is of the essence as the evidence is that getting the victim to hospital within an hour of the accident gives the best chance of recovery.

Unfortunately road traffic collisions are a lot more common than fires these days, so this is a key part of the job of the service.

I hope you found that interesting. We did.